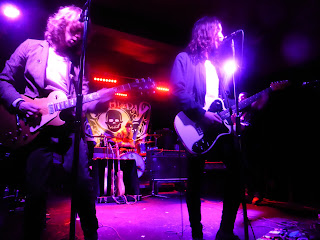 Good Things (Come To Those Who Wait) was the title of Cupids' last single, which turns out to be their final release as they rode off into the sunset and pastures and projects new after a sold-out farewell show at the Night And Day in Manchester on Wednesday night. What would ordinarily be a sad affair turned out to be a celebration of both Cupids and their predecessors Gramotones.

It seems inconceivable that we're saying goodbye to Cupids. They always seemed to be on the brink of becoming huge, the band you always thought would be the one that was going to make the breakthrough. In both incarnations, Jake, Sid, Ryan and James created songs that meant something to people, as witnessed in the love in the room for the old and the new tonight, but they were never throwaway designed to hit the charts and the radio stations but instead built around spiraling hooks and melodies, a real band in the sense that they didn't have one front man when three of them could take lead vocal without diluting their quality. The announcement on Monday that tonight was going to be the last gig came a shock, but whilst the inability, or worse reluctance, of the industry to take them and break them frustrated us, it must have been soul-destroying for them. 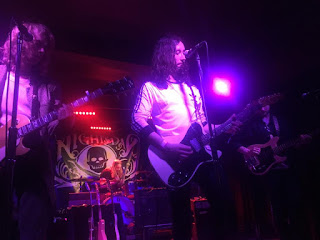 Tonight's a chance to let their hair down, Jake tells us before they've even started "we've decided we don't know what the fuck we're doing, so we'll do what you want." There's a shout for M62 Song, which they laugh off as it's a song they'd seemingly rather forget ("I'm sick to death of playing it, I never want to hear it again"), from a guy who shouts for it at the end of every song until they play it who then proceeds to obliterate the front row to make it his own for the remainder of the gig. They surprisingly don't play Money, the song that launched them as Cupids, or another single Confession Box.

They start with three Cupids songs and No One Talks, Hope It Never Ends and Heaven Knows and it's the variety of the three, the interactions between the vocalists and the diverse mix of guitars, keyboards and drums that are unmistakably them, but never sounding the same. A Study In Extremes might slow things down, but still has that same DNA running right through it as does Kickin' In, one of their singles that should have done the business for them.

Sid introduces the Gramotones song Dog With A Bone as "a song off our fourth album", one of a number of off-the-cuff remarks they make all night, some joking, some more impassioned like Jake's declaration that we should forget mainstream music (Bastille and The 1975 get a mention to big cheers) and support guitar bands rather than those that just plug in and program a sequencer and press a button that sets off a backing track. That they're making this up as they go along makes the evening feel even more special and confirms that they've got the talent to do just that and deliver rather than what most bands do and turn up and play a well-rehearsed set and between song ad-libs.

Drive, one of their earliest tracks in their former incarnation, is testament to just how long they've been producing songs of this quality. M62 Song is next, Jake telling us "I hate this song but we're going to play if for you" to the guy who's been shouting for it. To be honest, we're with Jake, it doesn't quite reach the heights of everything else they've done. Perhaps it should have been their big hit. Sid leaves the stage for Jake to start Daltry Street, but he's back for the end as the vocals kick in and lift the song. 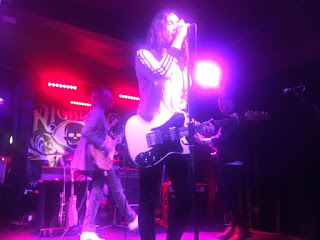 Their recent single Good Things (Come To Those Who Wait) is preceded by a new song and the two of them show that they still hadn't peaked creatively despite the decision they've made not to continue. They then finish off the main set with another Gramotones favourite, Soldier's Kiss, another crowd pleaser for their early days and our mate who's been shouting all night is delighted.

The encore starts with an extended version of Corporate Whipping Boy where they take the whole thing down, try to get us clapping, "because it's the last time I'll have control of a room like this" Sid jokes, let loose with each of them taking turns to play a solo and then optimistically but successfully tell us all to be quiet to let us hear James play drums. In any other environment, it might seem staged and unnecessary, but we're at a point where we'd forgive them anything. They finish with Little River, an old Gramotones set-closer from the days they'd be playing support slots round these parts. As they finish, they all come to the front for what is, they tell us, their first ever bow. And it's a well-deserved one.

The gig is a good-natured one, looser than their previous gigs, choosing the setlist seemingly as they went along and a little self-indulgent as the evening progressed and the alcohol kicked in, but you'd forgive them far more worse than that. They crack open a bottle of prosecco that they share around and Sid reads out a long list of thank yous to people before the encore. Whilst most bands would fall apart, the looseness simply emphasizes just how accomplished musicians they are, able to improvise and with an intuitive feel for what the other three will do that they'll find hard to replicate in whatever projects they move on to.

As we sit around after and chew over the fact that we won't see them play together again, an old discussion topic comes up. We have a theory that Cupids, and Gramotones before them, were actually too good and too principled to be successful at the level they should have been. Sadly we come to the conclusion we were right. They will be sorely missed.