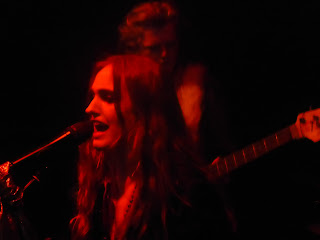 To celebrate the release of her debut single To The Sun, a packed out Jimmy's on Sunday night watched Maddy Storm deliver a set that confirmed the growing belief that she's one of the most talented newcomers on the Manchester music scene at the moment. Support came from the impressive Gathering Of Strangers and Charlotte Cannon.

Charlotte plays alone, sat at a keyboard, from where she delivers an intriguing set of songs about a varied range of subjects. She explains one song is about albino organs that people collect in Africa, joking that she's found a gap in the market with the song, whilst her final song Travel Driven asks the all-important question of how much travel agents get paid whilst alternating between walking 600 and 6000 miles. It'd be easy to dismiss her as "quirky" but that would be doing her a disservice. Her songs are delivered with no shortage of dramatic effect, changes in her keyboard playing style matching her expressive manner of delivering the words. She dedicates one of two songs she plays, called Service, from her forthcoming debut EP to her friend Craig Tarry and Viola Beach. 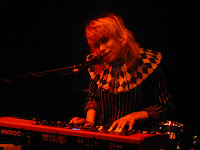 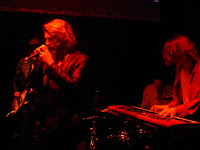 Gathering Of Strangers threaten to steal the show with a set that tests out the limits of Jimmy's basement sound system to its max. Front man Conor is the star of the show, delivering his vocals with an intensity that's so powerful that you find it difficult to be drawn away. They've got the songs to match too of course, the rest of the band's powerful direct approach flits between full on rock and roll and keyboard-driven psychedelia without ever wandering off-point at any time. We've seen them a couple of times before without them really grabbing us, but tonight in the hot sweaty basement something clicked. In a set full of highlights Something In The Water and She being particular favourites of ours.

Everyone's here to see Maddy though and word of mouth has meant that the room is full by the time she comes on, even more impressive given there's not been the hype that's accompanied some of the bands that have failed to fill this space. From the minute she starts to sing though, it's clear exactly why the chatter is building - her voice possesses a range and power that stops you dead in your tracks and she delivers her words with dramatic effect, whether it be her own material that's going to be a lot more familiar to people or her fabulous cover of The Clash's Rock The Casbah which she manages to make her own without disrespecting the original. 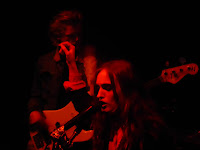 It is of course her own material that will make her name. The single takes on a new life in the live environment, unconstrained by the confines of a recording studio, but it by no means stands out compared to the likes of her next single The Tempest, the more sedate but no less impactful Water that precedes it and a song so brand new that it doesn't have a title yet, but which might end up being the pick of the bunch. She feels genuinely taken back by the number of people who've turned out and the response she gets, but it's something she's going to have to get used to.