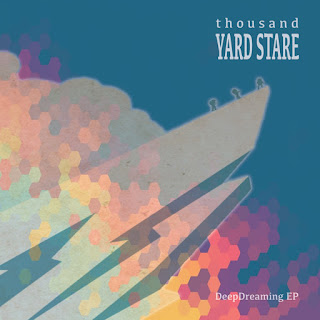 The resurgence of Thousand Yard Stare continues with not one, but two releases on their favoured format - the four track EP. Well, almost.

Having returned to the studio in early 2017 with the intention of recording a new EP, the band found themselves with enough new material for two EPs, so have brought them together here on one CD. Featuring six new unreleased songs, plus two reworkings from their recent live album, the EPs are sure to delight their fan base.

The Deep Dreaming EP opens with the slow burning Action Stations. Not as immediate as their previous singles, yet it has a harder edge than Wonderment or 0-0 After Extra Time - it is proper rock and roll, held together by some superb bass courtesy of Sean McDonough.

There’s a return to the sound of debut long player Hands On on second track Black and Blue Sky Thinking, before the almost Smiths-esq Dystopia. Dystopia was previously available on Live At Electric Studios, it sounds better with every play. Marginal Gains (Stargazing) rounds off the first EP and it's one of those laid back, epic songs Thousand Yard Stare do so well. It sounds like the perfect set closer. Laid back, yet optimistic.

The Star Grazing EP follows. In the Thousand Yard Stare tradition of mind baffling song titles, along comes Epecuen. Turns out Epecuen is an Argentine​ town, submerged in water for 25 years, a real life Atlantis. A delightful, Ride influenced slow song, it sees Thousand Yard Stare at their most reflective.

The upbeat, poptastic Heimlich Maneuver was also released previously on the Live At Electric Studios album and is the standout track on this compilation. With great riffs, a bouncing rhythm section and sing-a-long chorus, Heimlich Maneuver is classic Thousand Yard Stare.

Ciphers slows the pace down and is almost a homage to the 4AD label before This Is A Weight brings the EP to an end. A fine way to round off, This Is A Weight starts slowly before building and building with Dom’s powerhouse drumming and furious guitars from Giles and Kevin.

Deep Dreaming and Star Grazing show us that Thousand Yard Stare are still a force to be reckoned with. One of the most endearing of pop bands. There is a lot to like here, particularly with Action Stations and This Is A Weight showing something of a new direction whilst Heimlich Maneuver satisfies the faithful.

Thousand Yard Stare's official website can be found here where you can buy the EPs and a recreation of their Thousand Yard Who? t-shirts and they are on Facebook and Twitter.

They play a headline show at London's 100 Club on Friday 2nd June as well as a number of festival shows at the Gigantic All Dayer at Manchester Academy on Saturday 27th May and Indie Daze 4 at London Kentish Town Forum on Saturday 7th October.