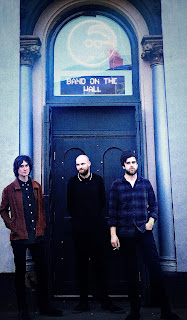 Déjà Vega have recently been in the studio recording their debut album after four years of releasing great singles and performing some incendiary live shows. We caught up with Jack from the band as they were preparing for their set at Heaven on Earth festival at Halle St Peters in Manchester today to talk about the record and their plans.

You've just been in the studio recording your debut album. Are you excited about finally getting a full body of work out there after a few years of putting out singles?

Yeah, we're all really excited to release a debut album. We've been putting a lot of effort in our song writing and now to be able to finally show our hard work is an amazing feeling.

Where and with who have you been recording the album?

We recorded the album at Edge Studios based in Alderley Edge. With a really good engineer called Mark Winterburn. We've worked with Mark a lot and he really understands our music style so we knew he would be perfect for the job.

Will the album be new material or a mix of some of the songs we've come to know and love and new ones?

Yeah, the album consists of songs we've had for a while and some new tunes we've only recently just started gigging. There's also a track on there that won't be performed live until the album released.

How do you think the sound of the album has changed since when you started the band? You recorded it in just five days so I imagine it will have a raw live feel to it.

The album is very well produced but it will still have that raw live edge that we are known for. We really wanted to capture the energy of our live shows for it


Are there any plans in place for the release yet? Will we get to see a vinyl release?

Yes, the album will be released on Vinyl and digital format. Maybe some CDs if the sales do well haha

You recently played the Shine cruise to Amsterdam, how was the experience of playing on a ship? And have you played any other unusual places?

It was a bit of a mad feeling performing on a cruise ship, it was never something we thought we would do. But none the less it was a good gig and we all loved it. And no not really.

You're playing at Heaven on Earth at Halle St Peters in Manchester on Saturday? Have you got plans for any more festivals over the summer period?

Yes, we are playing Liverpool Sound City in May.