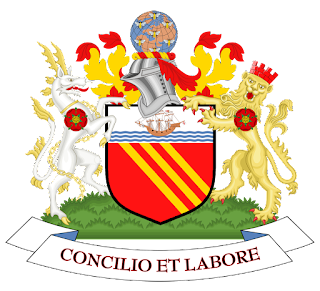 Monday night saw our city change forever. Twenty-two people who had gone to enjoy an Ariane Grande concert at Manchester Arena or to pick up their children were slain by a suicide bomber with scores of others injured. The scenes we'd seen on our TV screens from around the world, the tales from the Bataclan that horrified all of us suddenly became very real, very here as the sound of sirens and helicopters punctured the night air, rumours started to spread and later stories of horror and incredible bravery and compassion emerged.

Before Monday night I'd only a passing acquaintance with Ariane Grande. Her music is not my cup of tea, but she clearly is successful and her music brings immense pleasure to millions all over the world. I work near Blackpool so my train journey home often comes into Victoria and on Monday night, the train was full of excited children, teenagers and adults all going to see an act that they love. The station itself was similarly packed and the atmosphere expectant and joyful, the same joy that I get from watching my older, more miserable music with my friends. You cannot help but smile at that energy, buzz and excitement. That's what music does for people; old like us and young like those who had so much cruelly ripped away from them on Monday night and those that witnessed things that will scar them for life.

As the scale of the horror began to unfold through the night, from people hearing the explosion (I did in Ancoats, a mile away, and initially assumed it to be thunder) to hearing the chilling deafening wail of sirens, stories on social media from inside the arena of horrific scenes as well as lucky escapes, it was clear this was something that would change Manchester forever; an event that would shape our city like nothing since the Blitz in the 1940s. This was a direct attack on one of the two things our city is known and revered for worldwide, the rock on which many of us build our lives, our escape from the grim realities of life in a northern town. The fact that they targeted children makes it even more grim, whether as the direct target or those who would have spent frantic hours lost in the hotels that kindly took them in desperate to know where their parents were.

Our city prides itself on its multi-culturalism and its history of accepting and integrating others. It's what makes us what we are. We voted to stay within the European Union because we appreciate how we can benefit from understanding others' culture and incorporating it into our own. It's why we have a globe on our coat of arms. It's why we're seen as the second city everywhere outside of Birmingham and why people are drawn here in increasing numbers.

The reaction of the Muslim community to Monday night's events confirms just that - they are in the very very vast majority as appalled and shaken by what happened as the rest of us. Their religion does not condone the slaughter of the innocent and it's worth repeating that ISIS sees many of their fellow Muslims that understand the power and benefit of integration as their enemy too. When Morrissey squeals with his thinly veiled undertones about immigration, he forgets this city's history of integrating his forefathers into the fine woven tapestry that makes up this very bedrock of what we are. When he talks of cowardly politicians hiding behind protection, he forgets that he was the man that ran away from a plastic bottle. He doesn't speak for us - he's lost his understanding of what makes us Mancunian. When politicians and the social media zealots on both sides of the political spectrum try and low-life scum like Hopkins and Morgan spew their bile, they don't talk for us either.

There's a lot of fear here right now. But there's also more love than any terrorists who come to break us could ever hope to defeat and more defiance to the click-bait shock merchants of the press and supposed celebrities. The love that's flowing in the stories of generosity on Monday night, the amazing work that our often maligned police and ambulance services and NHS staff have done and continue to do, the love as strangers hug each other as they gather to lay flowers and pay their respects as they offer a hanky to dry tears that spring from nowhere as the emotion overcomes them and the love and spirit they display they talk to the TV cameras about the undefeatable spirit and resolve of the city not to cower in the face of those that want to divide us or scare us.

That fear is countered by an overwhelming refusal to let them win. Hiding away, changing what we do is letting them win. We have to be vigilant, we have to accept that we might have to queue a little longer, suffer the inconvenience of searches and not being able to take bags in, the idiots of the no pyro no party brigade need to take a look at themselves, but we must never ever let them win. "Do everything you fear, in this there's power, fear is not to be afraid of."

We will mourn the twenty-two that died, support their loved ones and those that have life-changing scars, both physical and mental, of the events that occurred, we will never forget them or allow them or their stories to be forgotten. Those from outside the city, including Ariane herself, are now one of us and will be forever.

Every time we go to a concert we have to sing and shout louder as we're doing it for them as well as for every one else. We must not and will not cower down to those who want to harm us and we will not let those that seek to divide us, including the likes of the EDL at the other end of the scale, achieve what they aim to do.
Posted by Even The Stars at 18:17