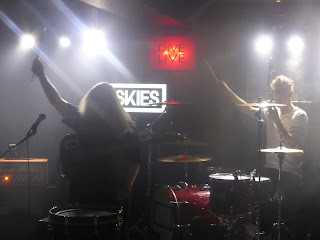 The first thing we notice about Deliah is Michelle’s voice, powerful at points, rich and dripping with the emotions that emphasize the words she’s singing at others which grab the audience’s attention and make them listen, which is no mean feat at some of these nights. Their style of R&B isn’t really our thing, but their ability to craft rich, diverse and distinguished songs can’t be disputed. Recent single Better The Devil is the sort of song you’d hear on daytime radio or in a store and probably Shazam to see who it is, such is its immediacy and earworm quality and Waiting For The Rain exudes similar qualities. As we said not our thing, but definitely a band to look out for if modern R&B is yours.

SKIES endure a tricky time with their equipment which breaks up their set somewhat which is unfortunate as when they get going, there’s a momentum to their set that should be unstoppable. They’re one of those bands that invite you to have fun, join in, their combination of guitars and drums and judicious use of sonic help, combined with a light show that almost blinds us but adds to their impact. 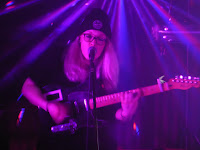 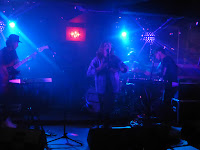 They’ve got the songs too. Recent single Afterwards is full of rippling, cascading energy that draws you in and has you singing along to it by the end and they’re equipped with a whole set of them. Leave Me is another prime example, once they’ve sorted out the crippling problems with Alie’s guitar, whilst their final song Drone feels like it was made for much bigger rooms than this such is the sheer scale of its power.

It’s impossible as well not to buy in to their ethos, they are the epitome of a band doing this for the love of their music, there’s an infectious joy that transmits from band to crowd in what they do that’s as much to do with them as it is with the songs themselves. When they ask us to raise our hands to clap along everyone does without question.  Trying not to fall for their off-beat charms is pretty much futile.