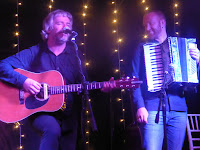 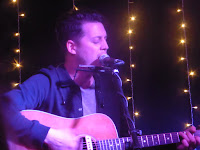 The performance room of Saltburn's Spa Hotel was the intimate setting for the latest show on John Bramwell's never ending tour of the UK. Overlooking the sea front from atop a cliff, it's the most picturesque and peaceful location for the tour so far and the audience responded with attention whilst the songs were being played and joined in with the between song chat to make it, like any Bramwell show, a unique experience. Support came from Dave Fidler.

Dave's brought his family along to the gig tonight, testament to the beautiful setting of Saltburn which manages to be both off the beaten track and one train change away from most of the UK. His seven song set features both tracks from his debut album I'm Not Here and songs from his recent recording sessions for a new EP and album to be released at some point in the future. The audience is a mix of people having made the trip to the seaside for the weekend and locals drawn in by the hotel's ability and desire to pull in known names to perform in a town which is off the gig circuit, but wherever they're from, they give Dave the respect he deserves.

The great thing about Dave's music is its timeless quality and the way the listener immediately feels compelled to warm to it. There's nothing done for show, but there's a depth to both his intricate guitar playing and the words that accompany it that draw people in. He writes about real emotions and experiences that he's gone through, such as the birth of his son in Easy Gone Easy Come and the death of his father on future single Home To Me, and the lyrics are set in a manner that anyone who's gone through similar experiences can relate to and the songs create an empathy between him and the audience that's quite special to witness even if they've never heard of him or his music before. 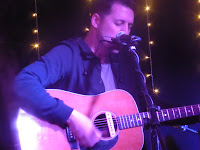 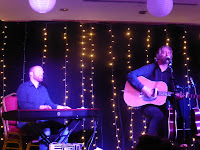 It's that thread that draws John and Dave together, very different personalities and characters in many ways but their music has the same emotional intelligence and experience of life that connects people to it. When Dave joins John later in his set to accompany him on three songs from John's forthcoming debut solo album (Leave Alone The Empty Spaces, Who Is Anybody Anyway? and Days Go By), you can see the strength of the bond between them as well.

Before that John takes us on a journey through I Am Kloot's back catalogue from their debut album Natural History to their last one, 2015's Let It All In once he's got himself comfortable. He jokes about a chair Dave has left for him making him look like Val Doonican without a cardigan before improvising his normal beer crate with a metal box. As he starts to play Astray, he's distracted by a yelp of joy from the audience at his choice of song. He is easily distracted which makes every one of his shows unique, at one stage he stops at a break in a song and pulls a face at a photographer before continuing as if nothing had happened until the end of the song where he asks for that photo not be used because he needs work doing on his teeth. He finishes Bullets before admitting half way through he remembered that he'd rehearsed a version of the song with Alan, who plays keyboards (and accordian) for about half the set, but forgot to invite him up on stage to do it.  He makes up for it later by repeating the song with Alan during the encore, inadvertently confirming what we already knew, that his songwriting is so accomplished that the songs allow themselves to be turned and twisted many ways without losing the simple beauty and power that they possess. Take Ferris Wheels, a driven guitar song from (our favourite Kloot album) Moolah Rouge that is slowed down to a beautiful aching searching number that utterly disarms the listener.

Stripped back to their bare bones, the likes of Mouth On Me, No Fear Of Falling and The Moon Is A Blind Eye have an even more stark impact on the listeners, as the room falls utterly silence other than for the sound of the guitar and voice. The same respect is granted to the four new songs that are played tonight. Time's Arrow might be familiar to some as it's been around a couple of years and featured in live sets, but the other three are new to most of the crowd. With Alan and Dave accompanying him, they are unmistakably Bramwell in their structure and in their impact yet there's light in Who Is Anybody Anyway? and Days Go By where there's darkness in The Same Deep Water As Me and To The Brink. 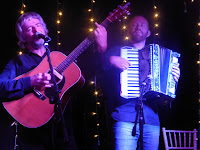 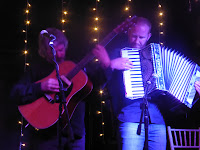 As well as being one of the finest songwriters of his generation, John's stories augment and flesh out some of the songs as well - before covering The Beatles' Blackbird in the encore he tells us of how they inspired him to learn to play guitar as a five-year old and he thought their changing styles meant that they were different people from a country called The Beatles and he recalls writing Black And Blue as a teenager and thinking he'd cracked the music business and how he went to London to find and hand over a copy to John Peel and finishing the story with the wisecrack "and that's how I wrote God Save The Queen". It's incredible to think that song is over thirty years old yet still feels as fresh and impactful as the day it was written. But that's the beauty of what John has done in that time - songs that mean something to people, that they can relate to and compare to their own experiences, despite the back story potentially being very different. Add to that the unpredictability that he brings to each live performance with an unplanned setlist and his willingness to engage with ad libs from the audience that means no two shows are ever close to being the same and you have a live experience that you'll never tire of.

John Bramwell played Bigger Wheels, Astray, From Your Favourite Sky, Mouth On Me, Masquerade, Bullets (without Alan), No Fear Of Falling, To The Brink, Time's Arrow, I Still Do, The Moon Is A Blind Eye, Gods And Monsters, 86 TVs, The Same Deep Water As Me, Leave Alone The Empty Spaces, Who Is Anybody Anyway?, Days Go By, Over My Shoulder, Northern Skies, Bullets (with Alan), Ferris Wheels, Blackbird and Black And Blue.