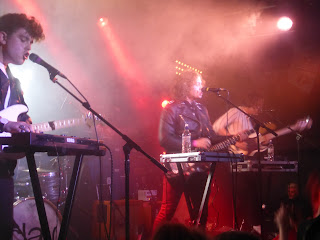 Clay's biggest headline set to date was a raucous affair at Gorilla as the mainly teenage audience lost themselves in the music for a forty-minute high-energy set that marked Clay down as a band that makes a genuine connection to their audience and gets them dancing and singing along to every word of their big singles.

Clay's approach is a very direct one; their aim is to get the crowd moving from the start and to not have them stop until they're ready to themselves. To that end they start with a bang - Stay Calm and their most recent single Saint have the crowd creating one of those big circles that seem to have replaced the traditional mosh pit before all converging in together. Two lads almost come to blows mid-song but Joe sorts them out without even breaking his stride by telling them there's no fighting at their gigs and they suitably admonished slink off back to their side of the room. Other than that and one idiot who thinks throwing a pint at the singer is something cool (Joe once again deals with it admirably), it's a crowd out for a good time.

Clay deliver in every respect. They've not just got one or two singles that everyone knows surrounded by lesser versions of the same theme, their new songs - America and Kinda - as well as You Were Always On My Mind and Why? have that same delirious infectious energy. Clay are here to have a good time and to ensure that everyone else does too - they're a little taken aback by the reaction for this biggest headline show of their career so far, but it's not surprise to us. That energy transmits from the stage to the mosh pit and it gets the audience going wild and by the time they get to the closing duo of Sun Dance and 6am and Joe instructs the crowd to separate down the middle before both they and the crowd let loose, their battle has already been long since won.

Our interview with Clay can be found here.