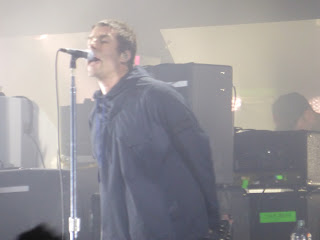 Liam Gallagher's first ever solo show sold out in seconds last week and with all proceeds donated to the fund to support the families of those killed and injured in last week's bombing at the Arena, the Ritz was a cauldron of very different emotions; excitement at seeing which Oasis songs he would play, what his new material would sound like and which of the excitable rumours about guest appearances would come true.

By the advertised stage time of nine, people were still coming into the venue, a mix of the additional security and anti-touting measures put in place for the show, but after a warm-up DJ set that included The Smiths, The Stone Roses and Primal Scream, the lights went out and strobes suddenly filled the room as the old Oasis intro Fuckin' In The Bushes blasted out, sending a hundred pints of beer and a thousand set of arms into the air.

Rock N Roll Star strikes up and it might as well be 1994 again. For all the criticism Oasis got, fairly and frequently unfairly in their later years, it's impossible to dispute the impact that Definitely Maybe and then What's The Story Morning Glory had. They defined an era musically, were the soundtrack to lives and are why an Oasis reunion would eclipse anything that any of the other Manchester monoliths could hope to achieve. Liam's recent claim that he was Oasis despite Noel writing the songs is proven in this glorious four minutes, that familiar head cocked back nasal snarl is in full effect and it's glorious to behold. Morning Glory is delivered with similar force and The Ritz, the most packed we've ever seen it, feels like its famed bouncy dance floor might finally give way.

Those hoping for an Oasis greatest hits set (and the rumoured appearance of Noel) are set to be disappointed though as the next four songs are new ones - and they display quite a range of styles to them that augurs well for the eventual release of his album. Greedy Soul and Wall Of Glass might not get the response that the two previous songs have, but they're streets ahead of what he produced with Beady Eye. Full of intent with more than a hint of menace, he delivers them with what feels like a new found sense of purpose and belief. Bold and Paper Crown are slower, but it still feels like that swagger is back and there's a confidence to him that he feels he doesn't just have to blast out a set full of Oasis tunes which what many of those around us seem to be expecting. 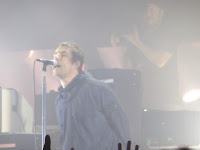 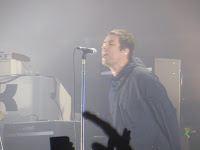 Cleverly, he addresses the balance mid-set with a powerful D'You Know What I Mean?. His band featuring various members of Babyshambles, Kasabian and Beady Eye give him the powerful backing to let loose on that and on a magnificent Slide Away, one of Oasis's finest moments which sees the crowd singing back the backing vocals. Strangers hug each other and every single person in the room, whether born then or since, is transported back to the nights in here as Oasis broke and were the most important band in the world.

More new ones including the magnificent Universal Gleam and You Better Run You Better Hide, before which Liam thanks us for listening to the new material that no one in the room had heard before, set the taste buds tingling for the album. Those two are the huge anthemic rockers that the rock n roll sign draped over the keyboards and Liam's public proclamations have promised, whilst It Doesn't Have To Be This Way drips with that arrogance that had waned over the years that gave him an edge other front men tried to and still try to ape with very mixed results.

The set closes with a guest appearance from Bonehead on Be Here Now, the title track of the third Oasis album and the reaction behind the front rows suggests that this might not have been the most obvious choice (ie not off the first two albums), but for those who believe that album was unfairly panned, it's as uplifting, confrontational and fearsome sounding as it's ever been.

The crowd burst into a prolonged chant of "stand up for the 22" whilst they wait for Liam to reappear. The expectant buzz that went around that Noel might be here doesn't get sated though, but we're treated to a very special and exceptionally emotional Live Forever with just Liam and a chorus of two thousand accompanied by very simple percussion. It strips the song back to its core and makes it feel even more poignant, especially when Liam leaves telling us that he loves Manchester.

For all the usual bluster around Liam, tonight tells us that this time he really means business and he's got a record that will back up his words.