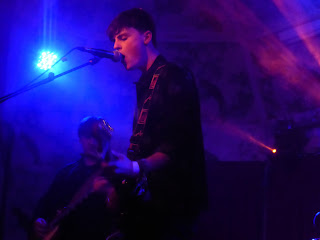 Matter Of Mind's latest live set saw them in the middle slot at the Deaf Institute. Battling with technical difficulties and a broken mic stand that gave up the ghost half way through the set, they delivered a set of new songs and some favourites from their releases to date and showed that they're still developing and growing as a band.

Their seven-song set is punctuated with problems with the mic stand, but they still manage to leave a positive impression on the Sly Antics' crowd that shuffle their way in throughout, boosting numbers by the time they get to the set-closing recent single Far Too Wrong, a song that feels built for bigger rooms like this as well as the sweat pits they've played in recently. That's part of the appeal of Matter Of Mind, they're one of those bands that you immediately know have the potential, both in the songs and the performance, to grow into something much bigger. The frustration can be waiting for the opportunity for that to happen, but it's happened to the best of bands that have made a breakthrough in recent years and hopefully it'll happen for them too.

The new song they throw in half way through the set is called It's Obvious and it shows a more mellow side to them that Coffee Stains And Migraines, which has an interesting new intro attached to it, had hinted at.  The other unreleased songs - Sunken Revelations which opens the set and Stay which is set to feature on a forthcoming EP - pack the same punch that State Of Mind and Blind Side hit us with last year. They're at a point where they need to come up with a plan on how to make the next step - they shouldn't be playing support slots like this now given the strength of the set they've got, but they're not at the stage where they're pulling in a crowd to justify a headline slot in somewhere like this whilst lesser bands are doing that with ease. They're still one of the most exciting young bands in town, but they need to make sure they're not overrun in the stampede.