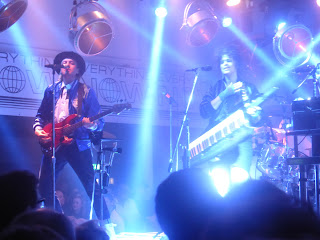 So often when the biggest bands in the world decide to play small intimate shows they lose the very essence of what makes them special. As Arcade Fire prepare for the release of their fifth album next month, they played a few low-key UK dates ahead of their Isle Of Wight Festival headline slot on Saturday. We made the trip up to Edinburgh to witness them deliver one of the most spectacular live sets we've had the privilege to experience.

Experience is an apt word too. An Arcade Fire live show is just that; two shows are never the same, either from a set list point of view or the improvised yet completely intuitive performances that they deliver. The Corn Exchange is, on most nights, a fairly sterile circuit venue with generally appalling sound and a shape that leads to large slices of the audience feeling detached from the performance. By setting up the stage in the round some of that problem is immediately dissipated, but the rest is down first to the anticipation that builds in the sweltering intense atmosphere as it nears stage time and then down to the sheer scale and ferocity of the band themselves.

As the house lights go down, a guitar strikes up from nowhere and the band appear at the door and make their way through the crowd performing Wake Up. It's a brave move in many ways, not least in the fact that they're exposing themselves to the audience from the very start. Most bands of this size give off a detached distant feel yet, despite the fact that Arcade Fire are as far from the traditional cliched stadium rock band as you'll get, there's an immediate connection and the audience don't stop moving, singing, dancing, screaming for the whole hour and a half that they're with us. 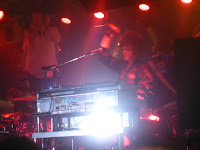 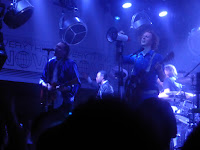 New single Everything Now, a bold, ambitious slab of Abba / Bowie influenced glamour is delivered early and lays bare exactly why Arcade Fire are such a spectacular outfit, both on record and live. It nods, it steals unashamedly yet it ends up being unmistakably them. The better known material, and they only grace us with two other new songs Signs Of Life and Creature Comfort from Everything Now, is met with delirium from the crowd who to a person seem absolutely up for this. As do the band who never stop moving around the stage, partly in deference to the in the round set-up they've adapted, and partly because it's just what they do.

Win and Regine share lead vocals as they work through a varied selection of their other four albums, choosing seemingly to group songs together from the same record whether intentionally or not. Despite the room being at melting point, there's no let-up in the pace of the set, other than a delicious slowed-down title track from Neon Bible that calms and soothes us after a wild duo of Rebellion (Lies) and No Cars Go. The magic is in the way the whole band come together and contribute both to the aural, but the visual impact of the show. Whilst there's so much going on, they feel as if they're absolutely atuned to each other, whichever instrument they're playing or role in the song they're performing, yet we know they're not just running through the motions of the same set every night, because that's simply not how they operate. 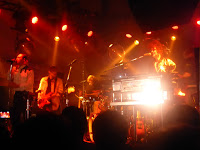 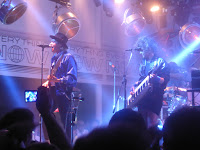 For an hour and a half we're taken on a trip away from the uncertainty and indecision of election night, the only reference being Win telling us that he hoped we voted as otherwise we have no right to complain. As we leave later, Wake Up gets new lines added to it as the crowd sing "fuck the Tories", but whilst the band are on stage this is one massive party, a celebration, a band at the absolute height of their powers, unchained by the sterility that often sets in when a band becomes an arena or stadium filler. The joy on the faces of the crowd is matched by those on the stage as they urge us to lose ourselves in their music. We don't need much encouragement.

As they leave us with a triumphant double hit of Neighbourhood #3 (Power Out) and a wild adventurous Sprawl II that sees them leave the stage one by one until we're left with just Jeremy on drums to deliver the final blow before he departs like the rest of them through the crowd from whence they came.

In a world where festival headliners are becoming increasingly predictable and generic, where music is being dumbed down to the lowest common denominator to shift units and creativity often squashed in the pursuit of units, Arcade Fire are a shining beacon of how you can retain artistic integrity, push the boundaries and create one massive party where, like all the very best ones, you don't know quite what is going to happen next.