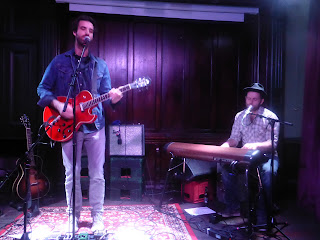 Following his tour supporting David Ford and performing as part of his live band, JP Ruggieri stayed on in the UK for a few headline dates of his own, supported by no other than David Ford. His intimate Sunday night gig at The Castle saw him perform a full set of songs he's written over the past twenty years including some from his gig-only debut album and charm a crowd with his humour and the stories he told between songs.

After a day of questioning his Twitter followers as what to play in his opening set, David Ford came up with a mix of songs from his forthcoming album Animal Spirits, his current The Union EP and a few old favourites. He's on great form, loose and lucid, freed from the responsibility of the headliner slot and what comes with it. Armed with just an acoustic guitar and a keyboard, his set choice becomes a little more eclectic and unstructured (as in he decides what to play next at the end of the song before), but he's talented enough to pull that off without any issues at all.

He starts with a beautiful tender One Of These Days, shorn of its female accompaniment, but none the less powerful as a solo track as it is a duet. The crowd stand in silence, possibly surprised at seeing David back in such an close-up environment. The next song is a new one that he says he's never played before, then recalls having played it in Norwich, and, although we're too polite to tell him, he actually played at the Fallow Cafe at the back end of last year. It's one of his more tender and delicate observations of lost love and romantic recollections. He then sits at the keyboard for the live debut of Someone Other Than You, a reflective piano ballad from The Union EP, during which he replicates the trumpet solo in the middle and jokes that it's better than on the record because he had to play it himself as well as telling one of the crowd who knocks over a drink mid-set "I can't take you anywhere."

He asks for requests and uncharacteristically for a Ford audience isn't met with a tidal wave of them, so he decides to play another new song, possibly titled Mountain Of Gold, that will be the closing track on Animal Spirits when it finally emerges. Again, fittingly for this gig, it's a beautifully reflective song that ponders that "a little hard luck and trouble made a man out of me." It's followed by Perfect Day, another from The Union EP, about the twelve week scan for his daughter and how it changed his life in very descriptive terms of how the world view changed. He finishes off back at the piano for O'Sullivan's Jukebox, a rueful look back at teenage years spent drinking his time and money away in his local Irish bar. 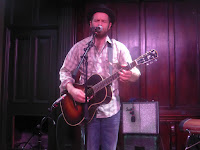 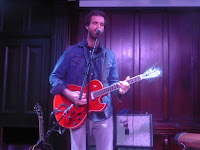 JP's set lasts an hour, a long time for an act many will not have been familiar with, but his magic is in the way he holds his audience's attention, either through his mastery of his guitar that leaves some of us staring and wondering how he coaxes such sounds out of it, his rich deep soulful voice that delves further into the emotions behind the words in his songs or simply through the way in which he engages with the audience and with David who plays keyboards on half the set, but who never tries to take centre stage.

He plays most of the songs from his album Waiting On You that's available at shows only at present, but then, like all great artists, has newer songs ready to reveal to us. He starts with The Meaning and Waiting On You with David accompanying him and within those two songs he's already captured the ears and the hearts of the audience. David's contribution is subtle and understated and helps to flesh out some of the songs that have a full band on the recorded version, but mid set he departs to leave JP on his own to deliver a wonderful self-analysing song called I Don't Want To Grow Up as well as one called Kicking And Screaming, which he explains was written as part of a songwriting collective event where he was given two words and then the challenge was to get them into a song.

He nods to some of his influences with a cover of Sam Cooke's Bring It On Home that's delivered without losing any of the soulful wonder of the original, before a new song, which he describes as four years in the making, called Up By The River, which threatens to surpass anything he's done. However, it's matched on the homeward straight, with David back in tow, by another new song called Buckets and then two from the album, leaving us with two of its highlights Don't Break My Heart and How Can A Man Live His Life Without A Broken Heart?  The use of the word heart in both gives an indication where JP's songs come from and the response he gets throughout the night becomes even more rapturous as he wins people over by the sheer emotional intensity and musical quality of both the songs and the performance. There's no showmanship, fancy moves, just a mastery of his instrument and a voice that creates a connection for the audience between the words and their meaning.