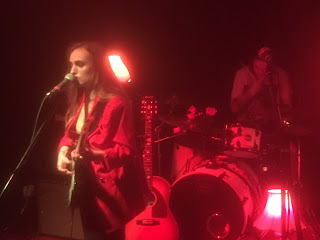 Maddy Storm is possibly the stand out talent on the Manchester scene at present. Whilst she's not yet attracting the audiences, as this opening slot at Jimmy's on Saturday night testifies, the jaw-dropping reaction her set gets from the fifty or so assembled crowd tells its own story.

We're not big on comparisons here at Even The Stars, but watching Maddy you can't help but draw parallels with the likes of PJ Harvey and Anna Calvi. Her songs may not deal in the same subject matters but there's an intensity to the performance, an energy that makes you just shut the fuck up and listen and marvel as the voice weaves all kind of patterns, drawing out every little bit of emotional energy and pent-up angst out of these songs.

Tonight with just drummer Tom for accompaniment these songs are set in even starker contrast in this intimate humid basement venue. As next single The Tempest, full of the most indescribable vocal gymnastics as the song soars then dives with seemingly effortless poise and grace, demonstrates Maddy simply makes this whole thing look so easy and natural.

Water and Silver Lining prove that there's also variety in her approach whilst a new song, just finished on the day and possibly titled Give Me More, hints at endless more widescreen possibilities. As she finishes with debut single To The Sun, which already feels like a staging post for what's to come, the response she gets says everything you need to know. Manchester has a special spectacular talent in its underground scene, one that everyone needs to hear.