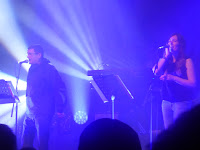 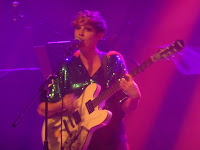 Paul Heaton and Jacqui Abbott warmed up for their massive Hull stadium show on Saturday with an intimate warm-up show at Warrington's Parr Hall and a set that straddled Paul's time with The Housemartins and his work with Jacqui in The Beautiful South and as a duo including two tracks from their as yet unreleased third album. Support came from She Drew The Gun.

"We're massive fans of Paul" says Louisa half way through She Drew The Gun's set and there's quite a lot of parallels to be drawn in their approach to music. Poet is the most obvious one, a scathing targeted attack on the evils of modern society and politics and an apathy to those worse off that Paul talks about later. Where I End And You Begin is a revelatory and disarmingly honest assessment of the impact of the demon booze that shares a bloodline with Old Red Eyes Is Back. The set is made of up of highlights of last year's Memories Of Another Future album and Louisa and her three piece band deliver a set that goes down well with the Heaton / Abbott crowd, in particular a beautiful If You Could See that swirls around us in the increasingly humid room and the set-closing cover of Malvina Reynolds' No Hole In My Head.

Opening with Heatongrad, a song about Paul's fictional Socialist utopia, it's clear that is far more than a warm-up. A woman behind us comments half way through that she's never seen Paul look like he's having so much fun before, and she's right. Whether it's delving right back to his earliest days, as he reminisces about his time on the dole ("or benefits as they call them these days") and that he's happy to pay more tax for people to lounge around and encourages us to remember Caravan Of Love next Thursday or dad dances his way through the joyful Five Get Over Excited right through to two new songs from the next record Crooked Calypso that would indicate it's going to be a joyous record that you can dance to. He later describes Happy Hour as a "proper dance anthem" and in its own sweet way it is just that. 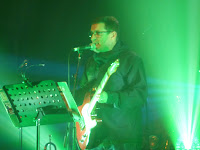 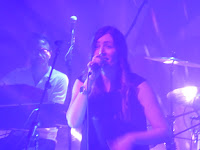 Of course it's The Beautiful South songs liberally sprinkled around the set that get the best reaction - Prettiest Eyes, a Jacqui solo Rotterdam, One Last Love Song, the main set closing Good As Gold, Don't Marry Her and Perfect 10 - where the whole room is joined in song. Everyone in here seems to know every single word.

The songs from What Have We Become and Wisdom Laughter and Lines don't shirk in comparison mind. The addition of brass and a choir midset make the likes of The Obesity Of Love, When It Was Ours and DIY beautifully rich and redolent, proof that Paul's current writing partner Jonny Lexus (who plays guitar) has struck up a very fruitful creative relationship that also brings the best out of both vocalists.

Paul's on good form, joking that he can see in the men in the audience's eyes that they were happy the warm up was announced as they were too tight for a weekend in Hull and advising Warrington that they should play nasty in their aim to be city of culture in 2021 by slagging off the competition. Jacqui meanwhile has an infectious smile across her face throughout, waving at the balcony and pointing out people in the audience. The musical chemistry between two contrasting performers with very different vocal styles sparks perfectly whichever era of Paul's career they're visiting and that's why they've still got the ability to shift 20,000 plus tickets for a gig.

She Drew The Gun's official site can be found here. They are also on Facebook, Twitter and Soundcloud.