Track Of The Day : Chevron Shawl - Piece Of The Pie 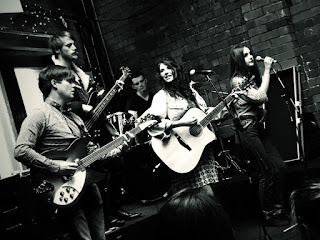 Piece Of The Pie is the debut single from a Manchester super-group of sorts Chevron Shawl as they prepare to launch it with a gig at the Night And Day Cafe next week.

Led by Katie O'Malley, already an acclaimed singer-songwriter in her own right, the band also features Adam Lewis from The Watchmakers on guitar, Emylie O’Malley on vocals, James Gaskill on drums and Jack Flett on bass. The single has a real feel-good summer vibe to it with Katie and Emylie's voices bouncing off each other throughout. It'll be intriguing to see what else they've got up their sleeves given their backgrounds.

Piece Of The Pie is the first song they've revealed, but they have an album's worth of material in the pipeline, some of which they'll be revealing at a show at The Night And Day Cafe in Manchester on July 7.

Chevron Shawl are so new that they don't have any social media as yet.