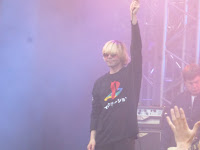 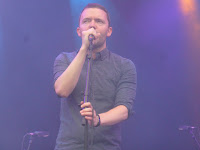 Fresh from the top five success of their latest album Different Days, The Charlatans headlined Scarborough's Open Air Theatre on Friday night with a career spanning set that also included a liberal dash of the new album. Support came from Manchester's fastest rising unsigned stars The Slow Readers Club who delighted fans old and new with a forty-five minute set.

This feels like the natural stage for The Slow Readers Club these days. As the thumping bass lines and drum beats ripple across the covered lake, up the seating and back down, they look and sound like a band made for these big bowls and stages. A set that covers both their self-titled debut and its follow up Cavalcade wins them a whole load of new admirers from the crowd that swells as their set progresses and the likes of Plant The Seed, Forever In Your Debt and I Saw A Ghost have the same effect on the Friday night crowd as they've been having on audiences for the past two years. 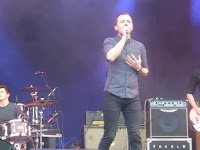 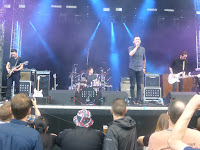 There's a natural confident swagger to them these days that comes with the response they got on the James tour last year, but also at their own increasingly bigger shows. One look around and you can see people singing along, their shirts peppered amongst two decades of Charlatans ones and people stopping their conversations to listen, taken by the powerful rhythm session that calls the tune and Aaron Starkie's emboldened vocals that turn these dark songs into something of a celebration that everything will be alright in the end. And by the end of their set, a haunting epic Know The Day Will Come, they've won over a whole new bunch of fans.

The Charlatans are one of those bands that get lazily get labelled as heritage whilst they're still pushing the envelope and discovering new facets to their sound. After a long hiatus their last but one album Modern Nature confirmed them as a band that could still produce new music to stand alongside their rich back catalogue and the initial response to Different Days suggests that they don't intend on resting on their not insubstantial laurels any time soon.

They start with two songs from Different Days, potentially a brave move given the anticipation that's built up in a crowd that's starved of live music at this level for most of the year without a significant journey, but Hey Sunrise and Solutions delight the faithful for whom this is the first big full band show since the release.  The place goes wild though when the unmistakable first bars of Weirdo crank up and the makeshift flooring over the lake gets its first proper test of the evening. Whilst not one of their biggest hits, Weirdo gets one of the best receptions of the night.

The middle section of the set mixes some of their best known tracks - Just When You're Thinkin' Things Over, One To Another, North Country Boy and The Only One I Know - with a generous selection of tracks from Modern Nature and Different Days. They just about get that awkward balance right of looking forward whilst understanding that some of the crowd will only be there for the bigger hits that remind them of their youth. It's a tricky tightrope to walk on, but they never lose the momentum of the set or feel like the audience have drifted away from them. 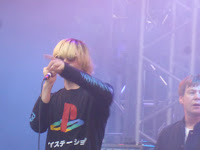 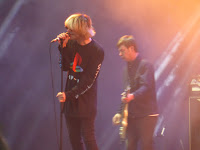 Like other bands with this approach, it's down to the quality of the new material. Let The Good Times Be Never Ending, Different Days and Plastic Machinery in particular are songs that remain true to The Charlatans' tradition of creating songs that are memorable and which generate a communal response to them without ever feeling like they're rehashing what they've done before. In Tim Burgess, resplendent in a long-sleeved Japanese Play Station style shirt, they've also got a front man with a genuine personality who the audience can both look up to and relate to. At points he's like the conductor for both his band and the audience in front of him that's in thrall to him.

The encore starts, surprisingly, with a resurrected Over Rising, a non-album single that followed their debut Some Friendly and first set their marker down as a band that wasn't always going to do what was expected of them by both the industry and their fans. Its soaring, searching chorus sees a couple of thousand hands raised skywards. In The Tall Grass is another curveball, before they for the first time do what's expected of them and finish with a glorious Sproston Green, their set-ender since the very early days. As the band take the song off on its winding instrumental conclusion and Tim punches the air in ecstasy along with his devotees, The Charlatans once again have confounded those that would write them off as a band trying to relive former glories by creating new ones in the here and now.

Email ThisBlogThis!Share to TwitterShare to FacebookShare to Pinterest
Labels: The Charlatans, The Slow Readers Club