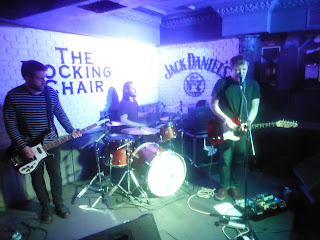 As part of their plan to break out of Manchester where they've developed a loyal adoring following for their exhilarating brutal assault on the aural senses, Ist Ist trekked across the Pennines on Saturday night to Sheffield's Rocking Chair armed with a batch of new songs and an uncompromising attitude that sets them apart from pretty much every other band around.

Without the strobes and ferocious light show that accompanies their hometown shows, this is a challenge for Ist Ist to channel all that through the music, but it's one that no one would ever doubt them capable of rising to. As the opening bars of Things Will Never Be The Same Again and its one line monologue echoes around the room, the assembled Sheffield pack don't quite know what to make of it all, but soon as the guitars are ratcheted up and Adam's speech turns into a blood-curdling yell, they get it.

Ghost is the first of four new songs that they've introduced recently at the expense of singles White Swan and Night's Arm and the perennial crowd favourite Rats and like the others that follow it doesn't just hint at a darkening of the horizons and an expansion of the mind, it causes an eclipse and an explosion. They save the armageddon for the very end though, the debut of a song called Rachel is so brutal, so stripped bare of everything except their three instruments and Adam's voice creating a violent end of the world scenario that no band could hope to wish to follow. 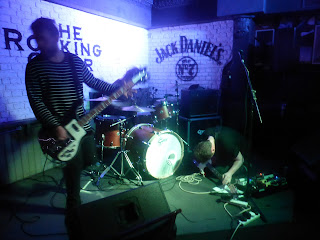 Sandwiched in between are their most recent two singles Strangers and Silence, both shaken up, rougher around the edges and with sharper jagged intent without losing that deeply embedded sense of melody that catches the ear and draws the listener into their lair. Emily is even more gnarling and pumped up than its ever sounded before whilst 7 is full of dramatic stop-start moments and not structured anything like any song you've ever heard before, but is carried on the sheer venom and anger of its delivery.

Ist Ist leave the crowd baying for more and at this rate by the time they get to recording and releasing their album who knows just what they're going to sound like and how much of this unique brilliant music they'll have cast aside on the way.