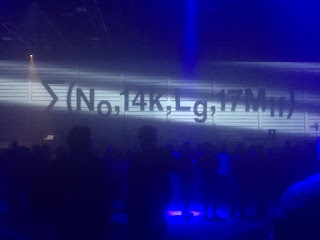 The undoubted highlight of the opening night of Manchester International Festival, if not the festival itself, was New Order's collaboration with composer and conductor Joe Duddell, students from the Royal Northern College Of Music and graphic artist Liam Gillick in a reinvention and reimagination of some of the more obscure and lesser-known parts of their substantial back catalogue.

From the opening bars of Elegia, it's clear that we're going to witness something special tonight, more than just your traditional New Order gig full of hits. The synth players are housed, if that's the word, in twelve boxes on two levels behind the band, with shutters that open and close to reveal and hide them when they play and when they fall silent. The shutters are also used for the light installation that feels perfectly atuned to the band's music, no surprise as Gillick, as well as conductor Duddell, are self-confessed New Order fans.  Who's Joe follows. From the much and unfairly maligned Waiting For The Sirens Call, it hasn't been seen in setlists since the tours to support its release but feels reinvigorated by this arrangement.

The set then heads back into the 1980s and Dream Attack, at which point Joe leaves for a couple of songs and the shutters close and the band perform, once some technical gremlins are ironed out, without the twelve synths. Again it's a song that's been resurrected after a couple of decades, but it sounds fresh enough to put most modern electronic bands to shame. The surprises keep on coming as the opening bars of Disorder strike up, a song New Order have never played in their entire career. At the end Bernard tells us to chill out a bit as this isn't a normal gig, chastising an uberfan called Norbert for jumping around waving his arms in the air.

The synths and Joe return and it's the middle of the set where this begins to turn into something spectacular as the songs are lifted out of their dour Factory skins into something that feels genuinely transcendental. Joe did this when he revisited songs on James' orchestral tour in 2011 and this time, with different tools, acts as the catalyst for a similar reinvention. The choice of songs themselves tell their own story - none of the next four songs - Ultraviolence, Behind Closed Doors, All Day Long and Shellshock - had been played since 1989 and, in fact, it's the first live performance of Behind Closed Doors ever. Laced with synths and synth strings, the four songs are brought to glorious life and with Liam's less is much more lighting installation it's a real spectacular visual as wel as aural treat.

Waiting For The Siren's Call is again represented by Guilt Is A Useless Emotion, another song that could have been destined for a life sat on the CD shelves of all but the most hardcore of fans, before the set starts to reward those with a less detailed knowledge of the band as Subculture, Bizarre Love Triangle and Vanishing Point head back into what most consider the band's halcyon days around Brotherhood, Low Life and of course Technique. As Bizarre Love Triangle hits its unmistakable "every time I see you falling" chorus line, the boxes where the synth players are housed flash in bright blue light in some form of chequered pattern and it feels like this is the moment New Order were made for. There's is strangely almost a subdued feel to the crowd, other than the end of song responses, testament to the way they're transfixed by what they're witnessing as the synths start to play an even greater role in the songs and the lighting gets more adventurous and powerful.

The main set finishes with Plastic from their most recent Music Complete album and what it shows is that they can still deliver huge uplifting anthems when the mood takes them and still remain true to the roots of what New Order are about. There's no way of course that anyone is going to let them go that easily and we're rewarded with a dark foreboding Your Silent Face and a second strings-drenched Joy Division track Decades to finish off the evening's proceedings.

The whole evening is an unmitigated success - from the choice of a setlist that's designed to both thrill the hardcore yet challenge the whole audience shorn as it is of so many of the most obvious tracks they could have played, but which would have diluted the genuinely special nature of the event right through to the coordination of the sound and lighting which complemented each other to perfection. It feels like not just the songs but the whole idea of New Order has been reinvigorated by this project.