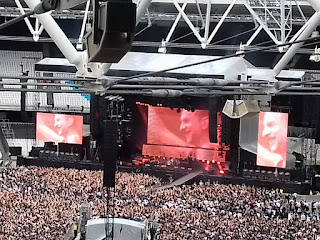 Fulfilling a long term ambition, Stuart Ralston travels to London to finally see a band who were instrumental in igniting his love for music back in the mid 80s – Depeche Mode.

Some two hours in to the show, as the huge stadium crowd sing along to Personal Jesus, Depeche Mode front man Dave Gahan is remarkably still strutting about the stage as if he owned the place. To a degree, he does. The crowd have come together as one, with every single person from six through to sixty and beyond dancing and chanting along. No mean feat to pull off at a monster event such as this.

Depeche Mode's The Singles 81>85 compilation was the first LP I ever bought and it's a record I still enjoy to this day, nearly three decades after I purchased it from the record counter in Boots. I've never managed to catch the band live though so as soon as the Global Spirit Tour was announced, I didn't need any persuasion to get booked for London – the only UK date of their massive tour.

As the band - Martin Gore & Andy Fletcher, joined by Christian Eigner on drums and Peter Gordeno on keyboards - take to the stage to a heroes' welcome, Gahan dances on in a splendid bright red jacket, allowing a theatrical curtsy before launching into Going Backwards, the opening track from this year's new album. The Kraftwerkesq So Much Love follows. With it's pounding beats, Gahan delivers a truly menacing vocal. This powerful opening continues with Barrel of a Gun and A Pain That I'm Used To. Whilst these are all classic (or soon to be classic Mode moments), the audience reaction is steady rather than ecstatic. The band mix it up and slow things down with Corrupt and a beautifully delicate In Your Room, one of three tracks from their 1993 album Songs of Faith and Devotion aired tonight.

World In My Eyes gets the strongest reaction from the estimated 80,000 crowd so far. Despite its age, World In My Eyes sounds fresh and sees Dave Gahan in his element, camping it up around the stage. He covers many miles this evening, making much use of the extended stage platform. He uses it merely to augment his performance. Unlike other super groups who mask their mediocre music with elaborate stage shows, Depeche Mode don't need that.  Whilst Depeche Mode are synth heavy, their tunes remain timeless. Indeed, none of their contemporaries could ever dream of playing to such a crowd with most of their Top of The Pops peers from that era playing the nostalgia circuit. Depeche Mode however, have a much greater appeal, as is evident from the voices we can hear around us tonight. There are countless fans here who have travelled from all over Europe to witness their (almost) home town show in the splendid arena built for the 2012 Olympics.

It's not all about Gahan though. Martin Gore takes centre stage to sing on A Question of Lust and Home. On these heartfelt ballads, Gore shows the softer side of Depeche Mode and the crowd love it.

The topical Where's The Revolution is perhaps the best received of the new songs on show tonight, ably demonstrating that Depeche Mode can still cut it. Wrong is another winner with yet another soaring, sneering, menacing vocal from Gahan before there's a sea change and the atmosphere in the stadium reaches fever pitch.

Everything Counts starts slowly, with some simple synths, before  Eigner's beat comes powering in. You can feel the mood change as Everything Counts builds and builds. By the time Gahan starts his vocals, he has the whole stadium in awe. Gore has the everyone to help on backing vocals. From then on, it's game over and Depeche Mode can do no wrong. Make no mistake, the closing straight is a massed celebration. Each and every hit that follows just gets better and better. Gahan has no need to sing on Stripped as the crowd do it for him before a momentous Enjoy The Silence. It's a thrill, a joy and an unforgettable moment for me and many in the crowd. Never Let You Down Again gets an even bigger response and it for the devoted masses it could be their anthem.

The encore sees Martin Gore accompanied by Peter Gordeno return first to deliver a beautiful Somebody. Just a piano and a vocal and a crowd of 80,000 to contend with. No contest, and another victory.  Walking In My Shoes sees the rest of the band back in place before a stunning, yet simple cover of David Bowie's Heroes, which the band make their own. I Feel You and Personal Jesus round the show off and everyone leaves the stadium in buoyant mood. As the masses pour out, we begin to hear news of another terrorist attack just a few miles away. People like us, enjoying a night out in London when their lives were tragically cut short.