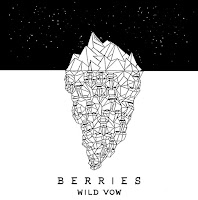 Anyone who reads this blog regularly will know we think Berries are one of the best new bands in the country. Their These Funny Things EP was one of our highlights of last year and their debut Manchester performance at the When In Manchester festival stole the show for us. They're back with their first new material since the EP, a song called Wild Vow

Like the songs from the EP, Wild Vow is an addictive riff-laden ear worm with Holly's unmistakable vocals taking centre stage as she, bass player Lauren and drummer Lucie deliver another song that will have you involuntarily reciting the riff in your head for days after first hearing it. The song is the first taster of their second EP, due out later in the year, and represents a progression in their sound without losing any of what drew us to them in the first place.

Buoyed by the response to the debut EP and support from the likes of Fred Perry, Amazing Radio and Fender as well as other blogs, Berries play a free launch show at The Old Blue Last in London on July 5, before venturing north to play The Church House Inn in Sheffield as part of Tramlines Fringe on July 22 and then Manchester Soup Kitchen on August 19. They also play The Finsbury in London for Gigslutz on September 8, with some more exciting dates hopefully to be revealed soon.