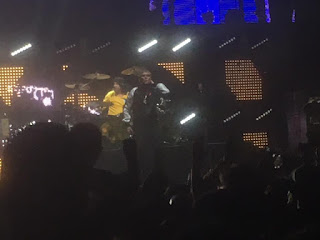 It's five years since The Stone Roses came back in a fanfare promising a glorious resurrection. What's come in between has been mixed, some stunning performances, some less so in huge outdoor bowls suited more to making money than to confirming their legacy. Tonight though in Leeds' intimate yet cavernous First Direct Arena, they rolled back the years with the best set we've seen them play since they got back together.

The atmosphere's buzzing as the house lights go down and the band assemble on stage coming in from different sides. That imperious unmistakable opening few bars to Adored are sung back at such a level that what's coming from stage is drowned out for the most part, but then that's exactly what these songs mean to the vast majority of people in this arena. That applies whether they were around the first time like us that are grey in the hair we have left or the young kids, including one perched proudly on his dad's shoulders all night with a t-shirt proclaiming this to be his first gig. The moment of truth arrives when Ian opens his mouth and tonight he sounds magnificent as his voice carries to all corners and has that confident, no bullshit, arrogant twist to it that helped to create that image on which this reformation has been based.

The set hasn't changed much in those five years. There's one new song All For One, which doesn't feel out of place here despite the stratospheric and unrealistic expectations that had been placed on it prior to its birth. A lot of these songs are from a time and a place very different to the one that we live in now. Even the early pre-album singles Elephant Stone and Sally Cinnamon and associated non-album b-sides Mersey Paradise and Where Angels Play have gathered the iconic status of many of those tracks from the debut album and it's not surprise that the set still is predominantly based around that record and that time.

Waterfall, Made Of Stone, She Bangs The Drums and This Is The One in particular are songs that mean the world to the people in here, they make strangers hug each other, people lift others up on their shoulders and everyone bounce around and sing / yell until they lose their voices. And sweat because the place feels like a furnace, but no one cares as beers fly round, smoke bombs are let off, because the overwhelming feeling is one of love and togetherness and it's something we all need given the state of the country and the world and the events that have threatened our safe spaces recently.

Curiously, the one song that doesn't feel like it's aged as well as the others is Fools Gold, sounding slightly dated, but then it's more than made up for a sprawling expectation-shattering Love Spreads, the lead track from the often maligned second album, which is more than a match for anything else they've ever done in our humble opinion and tonight feels even more powerful and important as its ever done. The Second Coming is also represented by a loose ragged but almost perfect Begging You and a bold belligerent Breaking Into Heaven.

There's only one way they're ever going to finish the set and I Am The Resurrection is a song worthy of finishing any show. Even now, nearly thirty years on, it imperiously makes its claim to be one of the greatest songs of all time from that confident self-assured proclamation of its title to the breakdown and the call to dance that brings the song to its winding spectacular conclusion.

This was a night where The Roses delivered on everything that the hype around them has suggested that they should. Sounding tighter than ever, Ian's voice in fine fettle and in a venue that actually feels far more suited to their imperious tunes than a big vacuous field or football stadium. What happens next is a matter of conjecture, but if this is their farewell, they're cementing their legendary status in the only way they know how.

The Stone Roses played I Wanna Be Adored, Elephant Stone, Sally Cinnamon, Mersey Paradise, (Song For My) Sugar Spun Sister, Where Angels Play, Shoot You Down, Waterfall, Don't Stop, Begging You, Elizabeth My Dear, Fools Gold, All For One, Love Spreads, Made Of Stone, She Bangs The Drums, Breaking Into Heaven, This Is the One and I Am the Resurrection