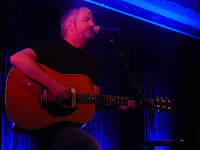 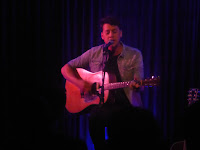 We made the two hour trip to Berlin to catch up with John Bramwell and Dave Fidler in the middle of their European tour in the intimate surroundings of East Berlin's Kantine am Berghain, a wonderful small venue very much in the shadow of one of Europe's largest techno clubs. A torrential downpour and the end of a three day rave didn't deter the crowd from coming out to pay respect to two beautiful sets of the most raw and emotional songwriting the UK has to offer.

Dave opens up proceedings and immediately the German audience take him to their hearts. The direct and personal nature of his songs, and the way in which he explains the subject matter of each of them, strikes a particular chord with this audience, whether they be the ones about life and children or the ones about dealing with death. His set is a mix of songs from his debut album I'm Not Here and from the follow-up that he's in the slow process of recording. As later in John's set, the audience seem to respond to the personal nature of the songs and the expression of real human emotions and Dave's songs have this aplenty. Whether it be those about his children - A Song For Nico and Easy Gone Easy Come - or the new song Home To Me about the death of his father, Dave's voice has an emotional depth and richness to it, enhanced by the magnificent job that the sound engineer does and the Kantine's natural acoustics, that makes the connection with the crowd, many of whom would be unfamiliar with his work until he stepped out on stage. 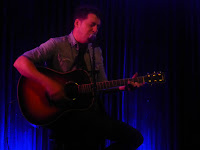 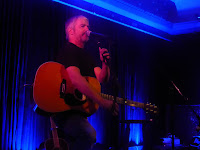 John's always made a special connection in Germany where I Am Kloot had a dedicated audience that seemed to fall for his stories. When he introduces To The Brink as a song about "drinking...", they finish the "and disaster" line, that leads him to quip that he's the only songwriter with a catchphrase of his own, but as you look round the room and see most of the faces silently mouthing the words to every song, you sense there's something special happening here, something unspoken, an invisible cord connecting everyone in some weird and mysterious way.

The songs come from across John's back catalogue, from Black And Blue, one of his earliest ever recordings when he went under the name Johnny Dangerously, that sounds, both musically and lyrically, as potent today as it did over three decades ago, to two new songs from his forthcoming debut solo album Leave Alone The Empty Spaces, where he's joined by Dave on an improvised bass. Those two songs, the title track and Who Is Anybody Anyway?, manage the remarkable feat of being instantly familiar as John's work, but without sounding just like another version of Kloot. Along with the other songs that he's played at other shows, it's shaping up to be a real statement of intent when it's released in the Autumn. The crowd response to them is excellent too, testament to both their quality and the attention and respect that both artists are granted all night. Again, as with Dave, the quality of the sound engineering accentuates the impact of the songs and the expression in John's voice.

John's on great form too, focused during the songs and between them regaling the audience with stories about the songs and experiences at his shows whilst playing them. The German audience is quite different to some he often has at home where there's constant cat calls and demands for a certain song throughout the night. That allows him to build up a rapport that goes beyond the connections that the songs make, as evidenced by the bar room singalong to To The Brink and the rare inclusion of Storm Warning in the encore as a nod to the torrential downpour that caught most of the audience on their way to the venue and the grin that regularly appears on his face shows that he's enjoying the whole night as much as his audience.

John Bramwell played Mouth On Me, Bigger Wheels, I Believe, No Fear Of Falling, To The Brink, I Still Do, The Moon Is A Blind Eye, Over My Shoulder, From Your Favourite Sky, Fingerprints, Black And Blue, 86TVs, Leave Alone The Empty Spaces, Who Is Anybody Anyway?, Northern Skies, Proof, Storm Warning and Astray.