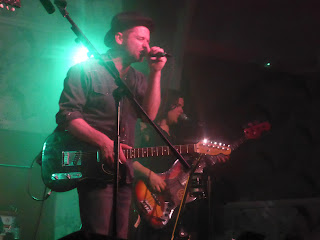 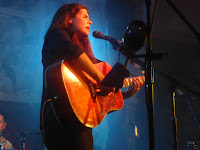 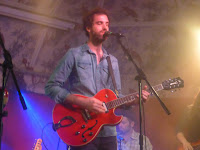 To support the launch of his new EP The Union and ahead of the release of his album Animal Spirits, David Ford teamed up with Michele Stodart and JP Ruggieri for a Hotel Cafe style tour of the UK where each of the three artists performed their own set with the other two as part of their band. With three such talented musicians in rotation, the packed Sunday night Deaf Institute crowd were treated to a full evening of great music, refreshing camaraderie and witty repartee.

JP Ruggieri opened up proceedings. For those who don't know him, the Connecticut based singer songwriter is on the tour after having played dates with David in America and worked with him in the studio over there. He's over here promoting his own album which is only on sale at the shows and the songs that he plays from it mark him out as an exceptionally talented songwriter, but it's his guitar playing, a mix of finger style and slide that he demonstrates not just during his set but during Michele and David's, as well as his world-weary lived-in voice that really make him stand out from your run of the mill artist. Waiting For You and Don't Break My Heart are two of the highlights of a set that's varied in style and grabs the attention of the early evening crowd that's waiting to be impressed. David and Michele's backing vocals, in particular, add extra depth to the songs of an artist we knew nothing of before entering the building. 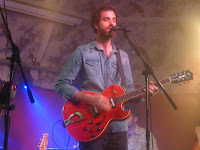 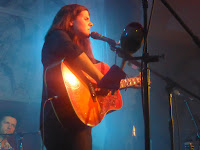 Michele is a lot more familiar to us, both from her role as bassist of The Magic Numbers (who have allegedly finally finished their fifth album, maybe) and from her solo career that has given us two exquisite albums - Wide-Eyed Crossing and Pieces - to date. Her set picks some of the harder, heavier songs from those albums that work with both David and JP adding guitar to them and some new songs that have a meaner streak running through their DNA. Foolish Love and Take Your Loving Back from the debut give a hint to the songs' subject matter and the new one which she finishes with is about late night drunk texting whilst the other early one is described as a drinking song to the consternation of an over-enthusiastic gentleman down the front who tries to engage her in conversation. A theme throughout the evening, she looks like she's having a whale of a time on this tour and that comes across in the performance particularly when she's got her own songs to reinvent with two such talented partners in tow.

For an artist that has been on the circuit for thirteen years now, David Ford never fails to come up with something new, confounding those of us who still wonder just how he hasn't reached a wider audience despite the fact he's resigned himself to never being top of the pops, as his encore of Every Time tells to song as he mulls over all the opportunities the industry dangled in front of him in the early days that he never took a bite of. His live shows are something of legend, no two tours ever seem remotely the same and this one is no exception. With the power and grace of Michele and JP behind him, he goes heavy and for the jugular. Gone are some of the staples like the crowd favourite State Of The Union but we don't hear a single murmur of discontent at this because the audience Ford has collected, a rag-taggle bunch from different backgrounds and different age groups, get him totally.

The new songs he plays from the forthcoming album Animal Spirits - and he gives us six of the ten songs plus the lead track Telephone from The Union EP - feel like they've got a much harder edge to them from these live renditions of them despite David telling us that there's a theme to the album that takes macroeconomic theories and applies them to matters of the heart. The songs feel like the strongest set that he's had since his stunning debut I Sincerely Apologise For All The Trouble I've Caused and they cover many of the themes that are addressed on his albums (he jokes that he has a country song, one that rails against the government and a love and homesick one on each record, fully aware of his own and unafraid to take the piss out of himself). He takes time out to explain the songs as well - the fabulous Real Damn Slow is about an old chestnut theme of his, the way working twenty years to make your name in the industry can be supplanted by appearing on a ten-week TV show. As ever, he doesn't come across as bitter, he just leaves it with a resigned shrug of the shoulder. 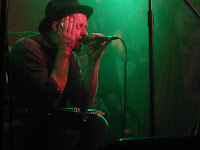 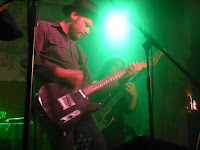 The Hotel Cafe style of the set, with Phil Wilkinson who plays drums for all three of them, helps to reinvent some of the audience's favourite Ford songs too. JP's slide guitar on I Don't Care What You Call Me is a thing of exquisite beauty, breathing new waves of life into a song that had become a reliable staple in a Ford set around the inventive ambitious chaos he always brings out on to the road, whilst Michele's seeming insatiable enthusiasm brings a sense of joy and fun, in particular in encouraging audience participation on Pour A Little Poison, that doesn't necessarily come naturally to David despite his obvious brilliance. As with all such collaborations of this nature, they end with a cover, and it's a fairly spectacular attempt at My Sharona, where each of them takes the lead role at different points whilst the audience sing and dance along.

Thirteen years from his first tentative steps as a solo artist and past many highs and pitfalls later, David Ford is still one of a kind, never bowing to the pressure of trying to make a hit record, although he does joke that I'm Alright Now ended up being a massive hit in France sung by somebody else, or conforming to any expectations of the industry. The crowd assembled, a loyal bunch mirrored by his audiences across the country, get this though and understand exactly where he's coming from.