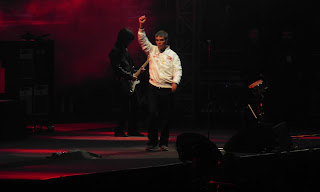 "Don't be sad it's over. Be happy that it happened" said Ian Brown half way through the most triumphant, uplifting Roses gig ever. Earlier in the week, it was rumoured the sold out Glasgow stadium show was to be the final show. On stage, in front of a capacity crowd, Brown confirms it.

The Roses' second city and the place of their most celebrated gig - Glasgow Green in 1990 - and now it all fits into place. The grand plan to go out in style. They certainly managed it. From the opening bars of Adored through to Resurrection ninety minutes later, the band are as tight as ever. Despite sticking to their standard set, there's a real sense early on that the band are in the form of their lives. Adored, Elephant Stone, Mersey Paradise and Where Angels Play - with Brown singing the original lyrics sound truly magnificent. Reni looks like he is having the time of his life, grinning from ear to ear throughout the opening onslaught. His drumming is off the scale. In fact, all three musicians play their hearts out. Mani conjures up the best bass lines as always and Squire is a virtuoso.

The double header of Waterfall/ Don't Stop is another early highlight.  As John, Reni and Mani connect through the grooves of Don't Stop, Ian hands out dozens of his tambourines to the crowd. By the end of the evening, he's distributed about a hundred!

The crowd are in great voice and it's like a classic 70s football match as fans chant their way through each and every tune. The biggest response of the night is saved for Made of Stone. The entire stadium are united in their adulation.

Second Coming songs tonight Love Spreads, Breaking Into Heaven and Begging You sound like they were written yesterday and are as polished as they have ever been, sounding much tighter and packing more punch than the recorded output. Real highlights, as is the one verse Elizabeth My Dear. 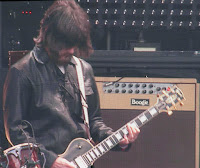 Fools Gold has more groove than ever and the crowd love it and All For One is a real call to arms. The only new song in the set yet it fits in so perfectly. A triumphant hint at what could have been.

After Brown's announcement, the end takes on more poignancy - This Is The One and Resurrection are truly magnificent.  Before the later, Brown treats us to some solo drumming on his bongos.

As Resurrection ends, there are assorted hugs all round although interestingly,  not all four of them come together as one. Ian and John seem particularly close and share a long embrace.  Ian, Mani and John also share a hug. Reni keeps up his traditional of ripping off his Brazil top and launching it into the crowd. He too joins in the hugging with John and Mani but it doesn't look as though he embraced Ian. Ian chants part of Beautiful Thing as he leaves the stage seemingly confirming it is all over. Mani leaves in tears. 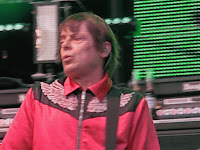 I've never felt such mixed emotions after a gig before. On the one hand, the band were magnificent. Better than ever. Yet, we will probably never experience the four of them on stage again and a sense of sadness permeates. Still, we can proudly say we were there.

The Stone Roses - Ian, John, Mani and Reni - we thank you for the outstanding records and memories of some truly special concerts. One Love x