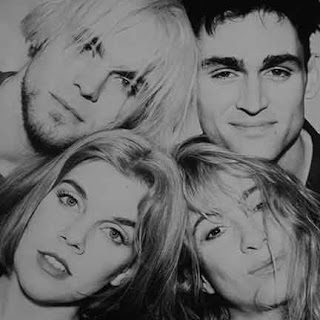 Belly's return is one of the least-heralded yet most-anticipated returns of the past few years, at least in the Even The Stars household. The four-piece enjoyed significant success in the UK with their number two album Star in 1993 and its follow-up King. They split shortly after and Tanya Donelly pursued a solo career for a number of albums including last year's Swan Song series. Earlier this year, Belly announced a series of UK dates for July and promised new material. We spoke to them ahead of their UK tour which starts in Glasgow on July 15th.

It's twenty-one years since Belly called it a day after two albums. Why is 2016 the right time for you to come back?

Tanya: Everything lined up for us personally this year – – our businesses/day-jobs are in positions to do without us temporarily, our kids are old enough to either stay home while we tour or travel with us for a finite amount of time, etc.  And it feels like a Now or Never moment, in a way.

How did the reunion come about, was it something that had been talked about for a while or was it a sudden decision?

Gail :  It was a slow build over the last year with increasing numbers of emails back and forth between band members. We wanted to gauge the interest level before going too far down the road and we were pleasantly surprised by such positive feedback.

Tanya, you'd been very prolific as a solo artist with the Swan Song series prior to the announcement - did that requench your thirst to make new music?

Tanya: Yes. Originally the plan for Swan Songs was that it would be the last from me, a retirement. I will most likely not record in my own name again, but the Series reenergized my writing and made me want more, so there are future projects in the pipe, including new Belly music.

How did it feel the first day you were back in the studio as a foursome?

Chris: We returned to where we started. Gail's basement.  It was where we auditioned her to join the band and where we practiced throughout the whole star album cycle. By the time we started king we had so much gear and touring stuff like merchandise and road cases we had to find a new bigger space, but Gail's was really where Belly came together so it was somewhat surreal.  Gail made coffee, her dogs ran around, we sat around and laughed just hung out.

By the time we started playing it was a bit like a flashback.  When I drove off after practice I spoke to my wife and I think she expected me to say it was awkward, or it was scary, or tense but it was actually so natural and organic that all I could really say was that it was just really fun.

A lot of the best reunions of bands from the 1990s have been accompanied by new material. You've been recording new songs with the band since the announcement of the dates - was that an absolute must for the reunion to work?

Tom: Well, collaborating on a couple of tunes for Tanya’s final Swan Song release was in a way the first step that lead to a serious consideration of the reunion, and Gail and Tanya had done a song together on the penultimate Swan Song release, too.

I think the reunion is as much about creative unfinished business as it is a retro nostalgia trip, at least for us, and all of us have been continuously involved in creating new music with varying degrees of visibility since Belly disbanded, so it just kind of seemed logical.

For me personally, developing new material is the most thrilling aspect of music, and doing it in an environment where the sum really surpasses the parts, and seems to do so pretty easily, is a rare and precious thing. I guess at the outset we might not have said new material was a must for this to work, but now that we’re well into it, it kind of feels like, yeah, of course we would do some new stuff.

And will we hear the fruits of the new recordings on the tour and on our stereos soon?  Will we see singles or is an album in the pipeline?

Gail: We're playing two new songs in the set and many new songs are being worked on as we speak -enough material to possibly warrant a full record at this point.

You're reissuing Star in a deluxe vinyl package for the tour, one of our favourite albums of all  time, were you surprised by the success it had when it was first released?  Number two in the UK album charts was a massive deal for an alternative band on a label like 4AD in those days.

Tanya: We were absolutely surprised by the success of Star, and continue to be. Of course we had ambitions for it, and we were very happy with it, but the out-of-the-gate speed of that initial success completely took us by surprise. It wasn't what happened to odd indie bands like us at that time, so it felt quite surreal for a while...

There were a whole raft of great b-sides on the singles accompanying both Star and King - some of which made it on to the Sweet Ride Best Of - will some of these feature in the live set as well?

Tom:The B-sides were absolutely the most fun recording sessions- the labels really didn’t care, b-sides were basically filler to them, so there was little pressure.  No big-name producer, no crazy expensive studio - we kind of got to do what we wanted to, got to try some weirder things, like 'hey, what does that funky-looking old keyboard in the corner sound like?  The constraint was usually that we had a tight deadline, but beyond having to meet that, we had pretty free reign.  And I think the results were some of our best tracks - so yes, a few of those will be in the set.

You're playing these European dates and then doing a US tour - are there any plans for after that or is this is a one-off?

Chris: We are really doing everything very DIY with no outside help or support, plus holding down families and day jobs so between the 4 of us we have our hands full just getting this brief tour off the ground.  There have been some offers and suggestions for 2017 so we will see what develops.

We had planned to put out a few new songs before the 2016 tour but we have decided to play them live first, as it is they have continued to evolve in rehearsal so they are really getting polished. After the touring we hope to spend some time working on this song group.  But specific plans haven't really been worked out.

Tanya Donelly is on Twitter. The Swan Series will be released as physical formats later this year in the UK via Cargo Records.

The reissue of Star is released on July 15