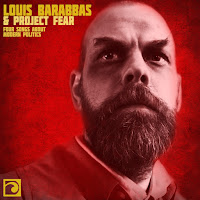 Four Songs About Modern Politics is a concept EP about the current state of politics and recent events in the UK from Mancunian troubadour Louis Barabbas. All proceeds from the rush release will go to Médecins Sans Frontières .

The songs come from Louis' long-awaited musical that he's been working on behind the scenes, two of them are written from the point of view of those in power and the other two from those that are governed by them. All four possess that inimitable style of his, a way with words and a delivery that's unique, one part caustic and cutting, another part theatrically dramatic.

A Good Day For Bad News, which clocks in at 1 min 50 sec but whose lyrics read like a more weighty tome, talks of the political tactic of hiding bad news when the public's mind is elsewhere occupied with more trivial concerns - "Cos all you need's a good diversion, celebrity accused of giving somebody a bruise? It's a good day to bury bad news"

How Long Can This Go On is set to a racing beat that imbues theatrical drama into the song and almost distracts the listener from the serious message of the words. It speaks of the powerless that the ordinary man in the street feels when it comes to politics "in every town for miles around, how long, how long can this go on?"

Hate is the most potent in its message, another song written from the side of some of our political leaders and newspaper editors, a damning statement about the xenophobia that the recent Leave vote validated amongst certain sections of our society - "if you really want to run things, give the people something to hate" being the tactic and "everything will be OK unless you're foreign, poor or gay, hate" being the message delivered with a venom that makes no attempt to disguise the contempt Louis feels for those propagating those messages. Forget lame political and social commentary, this is the real thing.

The final track Before You Disperse is led by a dramatic piano that sets the contemplative mood of the song, you can almost hear the sigh as Louis tells us "we've been through this before, we're all tired and sore, those years, well sure, they all left their mark" as a sign that the weight of the world has taken its toll but the song turns around and leaves a positive message that we shouldn't give in "who says we can't win, because I think we just might, gather your things, let your hope take wings."

In a world where political commentary has almost disappeared from music, and where it still exists it's diluted down to mean nothing, Four Songs is a refreshing change, not afraid to pull punches and tell us how it really is. It paints a bleak picture of government walls hiding what's really going on from us, a lack of political empowerment of the people, the rise of hate, but leaves us with the thought that we can still do something about it if we all come together. Now only if people were to listen.