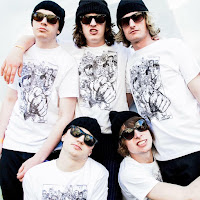 Cabbage have been causing quite a storm in Manchester over the last six months. Word of mouth sold out shows which descend into near chaos, nakedness and mini riots with an ever expanding fanbase captivated by their off-the-wall approach to their art. But, as Dinner Lady, the latest song to be taken from their recent debut Chou EP, shows, there's something quite special about them.

Based loosely on one of the band's experiences as a dinner lady at the exclusive Giggleswick School, the song contains classic line "to calm my distaste, I had a wank in the quiche, and I watched the headmaster get it stuck in his teeth" amongst others. Whilst lyrically they might often leave you scratching your head at where the hell the idea entered their minds, their music is direct and aimed at getting you dancing and moshing as evidenced at their recent Soup Kitchen gig.

Dinner Lady is from the Chou EP that is available on CD and download via their Bandcamp page and on 10" single via their official store.