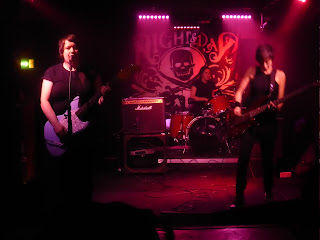 LIINES are a band on the brink of making their mark. Recently signed, they've got big plans for later in the year with the release of their next single Disappear. We caught up with them in the Night And Day as they played a half-hour set which confirmed everything we knew about them and which won over a new set of fans.

Regular readers of the site will know how we've championed LIINES. There's a lot of great bands knocking around the Manchester scene at the moment, but none of them, with the possible exception of ILL, are coming close to what LIINES are creating.

Loud, bold, direct and challenging their audience with acerbic rhythms that thrust at you blades showing and ready to cut right through you. As Zoe screams breathlessly before hurling herself in the chorus of Liar mid-set, they've turned the temperature up in the room several notches and they've got the audience rapt in their gaze. Simple yet fierce guitar riffs catapult themselves over the propelling momentum of Leila's drums whilst Steph decorates the songs with rhythms that make you dance, almost subconsciously. Another future single Be Here, Cold and their last single Blackout all have that same delirious effect without ever sounding like a formula. 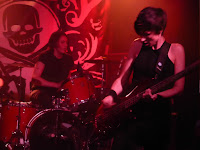 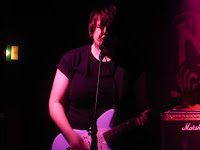 They finish with last year's breakthrough single Never There, a song that proved that they've also got that ability to produce something that takes your head off live yet doesn't turn off the champions of radio like John Kennedy who picked up on it and had it on rotation at XFM. With the likes of Disappear primed for an October release, if we heard Zoe right at the end of the song, we should expect to hear a lot more of them.

The telling sign of a band on the up is watching the audience react. There were a lot of curious onlookers at the start of their set who by the end were fully engrossed in what was going on up on the stage, bowled over by the sheer tidal wave of energy and passion that LIINES generate. There's much more to their armoury than that of course, but it's that momentum that picks everything and everyone up that stands in their path that will make them unstoppable.

LIINES played Yes Again, Disappear, Hold Your Breath, Nothing, Liar, Be Here, Cold, Blackout, Part Of You and Never There.