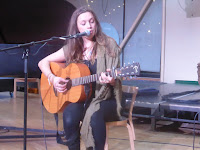 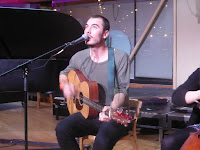 Once a month the Royal Exchange hosts a special series of arts events under the name of Special FX from 6 to 7pm. The event showcases some of the best local talent and Friday night was no exception as Bolton's talented Janileigh Cohen and the seemingly omnipresent Liam McClair charmed an audience into silence with an hour of fragile emotional folk music of the highest order.

Janileigh appears a little overwhelmed by her surroundings at first, telling us that she's used to playing out on the street, but whilst she admits this with a smile on her face, there's certainly no sense of it once you listen to her play, whether it be on acoustic guitar or on the hall's fine piano that she tells us is an "upgrade" on what she's used to. There's a delightfully fragile intimacy to her songs and her voice is so intense that you can hear every little sinew of emotion in the words that's she singing. She's also an accomplished pianist as well as guitarist and the songs she performs at the piano - Sister, Same Old Road and our favourite of the set Broken Town - silence the chattering classes tied up in their own ignorant conversations. 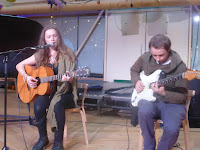 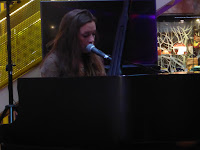 Rich Williams provides accompaniment on electric guitar and his contributions, whilst subtle, add depth and richness to the likes of Same Old Road and Once Again, both tracks from her excellent debut EP that came out last year. We hadn't seen Janileigh before last night, but on the basis of this performance, she's likely to make even more of a name for herself in Manchester and beyond's folk circles in the coming months.

This is the first time we've seen Liam McClair play with other musicians - he's got Polly accompanying him on cello and Morgan on vocals - and it's intriguing to listen to his songs in expanded format. The likes of Lose My Faith, Honest and Honey lose none of their personal touch, in fact their connection with the audience is accentuated by the light, shade and contrast that the additional instrument and the female backing vocal provides as Morgan's voice works perfectly with Liam's. 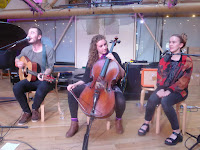 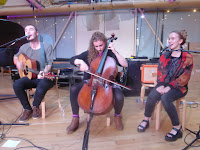 He also plays a new song called Silent Nights In The Forest which shows how his songwriting is developing and his subject matter broadening without losing the traits that make him special in the first place. As ever, he's effortlessly engaging with the audience, whether it be joking about his height, encouraging us to sing in one song, whoop in another and production percussion in the form of clapping in another one. It immediately makes the audience warm to him even if they are so devoid of pulse that the soft mellow strains of the music don't do that already. As he finishes with recent single Hunted, the last of a short, but very sweet, six song set, he's won over a new audience of fans as well as cemented a place in the hearts and minds of those that already know him.

These Special FX hours are one of Manchester's hidden gems, free music in a delightful rarefied setting from artists that you may not have heard of before, but who are unrecognised gems in the fertile Manchester music scene.