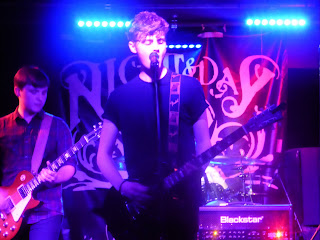 Stockport's Matter Of Mind are a band we're tipping for the top. With an assured three-track EP A State Of Mind under their belt already, they've started to win some admiring glances around Manchester at the moment and on the basis of tonight's passionate set, they're likely to continue to win hearts and minds as they develop still further.

For a band whose gig count is only just creeping into double figures, Matter Of Mind are an assuredly tight live band. The way Jordan's vocals interact with those of drummer Connor already stands them out from the crowd as does the intuitive way that they change the pace and mood of a song almost instinctively, the four of them together as one fluid unit confident, but not cocky, with an absolute belief in what they're doing. They fuse together raw rock hooks and riffs, but do it with a knowing nod to something a little more pop in its outlook - so that the likes of Silence and State Of Mind will have a universal appeal, whilst there's a hint of a young Noel Gallagher (ie when he wrote about growing up in a northern town) in the highlight of that EP Coffee Stains And Migraines.

After opening with Live By The Book, they dispense of the three EP tracks next, a bold statement that says to the accompanying moshpit that there's much more to come from them. A cover of Amy Winehouse's Back To Black might not be to everyone's taste, but it's a sure sign that Matter Of Mind know their music and aren't ashamed to be influenced by those that might not be deemed cool in the circles in which they will mix. We think that's always a good sign with a band.

They finish with two new songs and an old favourite. Sunken Revelations and Far Too Wrong, the new ones, show that there's no lack of diversity to their sound, without them straying too far from their love of big soaring anthemic rock that will grab you by the throat with its intensity and shake you until you submit. Both scream potential single from the rooftops. Their finale is one of their earliest tracks, The Blind Side, but such is its absolute power that blows away anything and anyone in its path as the four of them propel themselves into a frenzy that it's sure to play a very big part in what we think will be an inevitable rise through the halls of Manchester and beyond.

They play Rebellion in Manchester on Saturday (16th).