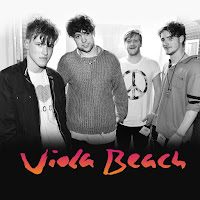 Viola Beach's debut album should be coming out under very different circumstances. The tragic death of Tomas, Kris, River and Jack as well as their manager Craig in a road accident in Sweden back in February meant that they were never to see that release for themselves. Viola Beach is a compilation of their first two singles, four tracks destined for an EP release and a live BBC session, nine songs that shine a light on what might have been, a precocious talent, still untainted by the quest to sell records and driven by their infectious unbridled joy at making music. It's a record that will make you cry, but will also make your heart beat a little bit faster.

The album opens with Swings And Waterslides, the song that the world wished could have been a number one tribute to the boys. Its undeniable beauty is in its innocent joie de vivre, whether it be that unmistakable guitar hook that escaped the producer's polish and is all the better for being there in its raw beauty or the eyes wide bright light time's right feels right lyrics including that chilling "won't you come home" line that feels a million times more poignant now. It was a fine marker to put down as a debut single, a song that would have stayed in the hearts of those who were there at the beginning when they were filling arenas, a statement of intent at that time that will now forever be a fitting memorial.

Like A Fool was a b-side to their second single Boys That Sing although like so many of their contemporaries - Blossoms, Vryll Society, Hidden Charms - such terms are for record companies rather than the bands, such is the love that is put into each and every song whether it's destined for Radio 1 or the hearts of those mostly connected to the band. It fades in from nowhere, it has that magnificent charm that so many bands early work has when working on a budget and replicating a live sound without production trickery that can often dilute them.

That feeling runs through the new songs in the middle of the record too that were going to make up an EP. Go Outside has a looseness and a insistent rhythm to it that makes it impossible to not your head and tap your feet to it and, if you'd seen them live, recall that unbridled joy that the four had up on stage. Drunk demonstrates a harder edge in the guitars, but in its lyrics deals with concerns of youthful relationship issues and uncertainties - "I've been trying hard to leave you alone, trying not to pick up the phone, I always do" - the sort of words that would have had thousands of similarly confused teenagers (and older) singing them back once the band's profile had built. Think the simplicity of the connection that something like Catfish And The Bottlemen's Cocoon makes and you have the right idea. That was the mark of how big they could have become.

Really Wanna Call repeats that trick of nestling itself in your brain on one listen, an addictive rhythm that has hints of samba and Kris' repeated hook line "I really wanna call, show you love now" that grabs your hand as an invitation to dance and lose yourself in the heat of the moment that they create.

Call You Up really does lay down a marker though that this was a band just at the start of its journey and had far more up their sleeve than hitting you between the eyes with their boundless energy. It would probably have been destined to bookend their album and their live set, clocking in at five minutes, building slowly, giving pause for respite, but "I call you up in the middle of the night in hope that you want to hear from me, I just want to know that you're feeling alright" betrays a softer side behind the delirious bravado of the relentless energy of what's gone before. It's the song that really confirms that they were destined to blossom into something truly special and lasting.

Interspersed in there is the b-side Cherry Vimto, the b-side of Swings And Waterslides, a hint that they were set to widen their horizons. It's less immediate than its A-side but without ever losing that simple joy of making music.

The inclusion of Get To Dancing, surely destined to be a big single given the reaction to its airing on a BBC Introducing Session, is included fittingly in that form. Its brilliance is inherent in its lack of complication and pretense, it's simply great pop song that's completely comfortable in its own skin, an edgy guitar riff, insistent percussion that drives the song along and Kris' almost nonchalant delivery serve to remind us of their knack of making the simple sound so thrilling and vital.

Their final single Boys That Sing, a song about learning to sing to impress a girl Kris has fallen for - "and she said together we can take on the world" - encapsulates in three minutes everything you need to know about Viola Beach, living life and playing music with a cheeky grin on their face and throwing a knowing wink that it's impossible not to fall for.

Viola Beach came from a town where all the outlets for creatives were closed down by the centralisation of cultural activity in the big cities so they went out and made their own around The Lounge Bar in their native Warrington, determined to put their hometown back on the map. Viola Beach, the album, shows that they were a band on their way to living that dream.

It's fitting to leave the last word to their own Facebook page - "we are a really lovely 4 piece indie pop band from Warrington." They may be gone, but they'll never be forgotten.