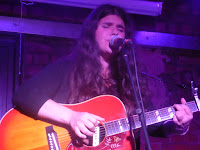 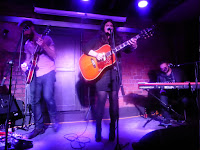 To support the launch of her second solo album Pieces, Michele Stodart played two intimate reveal shows in London and Salford this week. We caught up with her in the up-close-and-personal surroundings of Salford's fabulous Eagle Inn to witness a show that drew from Pieces, but also her debut Wide Eyed Crossing, a Neil Young cover and two brand new songs.

Best known as the bassist and backing vocalist from The Magic Numbers, a description that does Michele a disservice, she has been quietly working in the background on her own solo career as the band prepare their next album for release early next year and brother Romeo works with Ren Harvieu on her second album.

Michele opens her set with two songs solo with just her and an acoustic guitar. There's absolute silence in the room, as it should be, as she opens with a brand new song Tell Me before playing Once In A While from Pieces. The intimacy of the venue and the crystal clear sound means you can hear every little sinew of emotion in her voice and that's a theme that continues through the evening as she's joined by Matt on guitar (and occasional xylophone) and Andy on keyboards and both provide backing vocals as well. Michele's partner in crime, Angela Gannon also of The Magic Numbers, is coaxed up on stage to duet as well.

Whether the songs are from Pieces or Wide Eyed Crossing there's a continuity of purpose and theme to them. Michele writes songs from the heart, songs like Ain't No Love and Foolish Woman being cases in point, and in a venue like this where you can see the whites in her eyes and there's no escape, it's impossible not to form an emotional connection for the hour and a half of her set. Matt and Andy don't overpower the songs with their contributions, but they bring with them light and shade that really allows the intrinsic beauty in them to shine. There's no show-off moments, no big statements, just beautifully poetic and heartfelt songs that mean the world to Michele and which she transmits so perfectly to her audience. 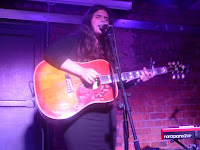 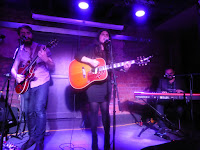 She's not shy of audience interaction too, name checking people who've helped her on her journey throughout and as the main part of the set concludes she asks us all to contribute backing vocals and harmonies to the delicious Will You Wait?, possibly the stand out moment of an album and a show full of highlights.

In the encore she covers Neil Young's Birds and does one of his lesser-known songs justice, before transforming the mood of the room with a magnificent new song called Heard You Gotta that cuts loose the shackles and lets go country style to leave us on a massive high.

At the end the audience response is possibly the loudest and most unanimous I've ever heard in the Eagle Inn. Michele has absolutely charmed everyone in the room, not just with the beautiful music but also with her modest infectious spark and personality. Pieces might just prove to be one of the surprise albums of the year, but you also need to go and see her live to close the circle on the songs.

Our review of Pieces can be found here.