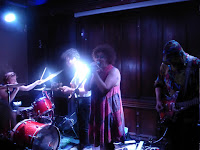 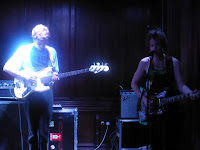 Weaves are on their first headline tour on the back of the release of their self-titled debut album and their sold out Manchester show, sold out on word of mouth rather than radio airplay, proved them to be a band with an unstoppable momentum set for bigger rooms than this. Support came from Perth's Methyl Ethel.

The start of Methyl Ethel's set puts down a marker for the rest of it. They start to play without fanfare or announcement, building their opening track slowly before exploding into a beautiful ball of musical light. They say almost nothing to do during the forty minutes of their set, no song titles, no explanations, but it's not needed as they are content to let their music do their bidding for them. Their set pulls from their recent album Oh Inhuman Spectacle, an immediate one to go out and delve further into on the basis of this performance - the lead single Twilight Driving being naturally one of the stand out tracks of the set, but what really stands out throughout is the natural flow of what they do; songs feel organic rather than structured and they lose themselves in their music but without ever losing their connection to an audience that they hold in their grasp. 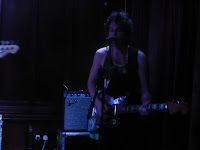 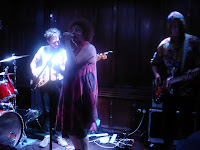 Weaves' Castle show might just end up as being one of those shows that are talked about for years. It's unfeasibly hot in the room, even by the standards of the sauna-like conditions you experience at a packed-gig here, but none of that seems to matter as Weaves let loose with a twelve-song onslaught on the audience. Whilst the trio of Morgan, Spencer and Zach all look lost in their own world creating the sharp, angular twisted tunes, they provide the canvas for Jasmyn to hold us spellbound by her radiant smile, infectious energy and, of course most importantly, her voice. Whilst never losing its raw power, it's the sheer breadth of emotions she conveys that stands her out from the pack.

The likes of Shithole, Coo Coo, Hula Hop and One More are songs that are set to etch themselves into the conscience of music lovers everywhere. In this tiny Manchester back street pub they inspire three young men to dance around like lunatics whilst the more reserved stand back and drink in the power. They're already too big and too loud for a room like this and that just adds to the pressure cooker that feels like it's going to explode.  They finish the set with an impromptu encore, because no one is letting them go anywhere, and Jasmyn ends sat on the floor, still singing, in a circle we've created for her as she makes her way through us.

Weaves are, simply put, one of those bands that stand out in a space of their own away from contemporaries or easy comparisons. They may never become the biggest band in the world, but there's a feeling they could, in their own little way, become one of the most important. The sixty or so people walking out of the room, exhilarated, breathless and sweltering, certainly thought so.