Ethan And The Reformation - Manchester Night And Day - 23rd July 2016 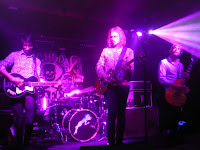 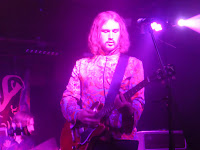 Ethan And The Reformation are a band already making waves in Manchester and beyond with their debut single Hollandia and their soon-to-be-legendary live shows. We caught up with them opening for Little Barrie at the Night And Day on Saturday night on the back of their own recent Soup Kitchen headline.

The word psychedelic has been bandied around way too much in the past few years in Manchester, but just as it seems to be going out of fashion, along come a band that redefine it for themselves. They are a one-off phenomenon. Ethan And The Reformation don't just do songs, their pieces of music are exhibitions, experiments and something of kaleidoscopic intoxicating beauty.

Their live shows are delicious affairs where they create a whirlpool that it's impossible not to be drawn into, they create an atmosphere of peace and love for which their music is the soundtrack. At points it feels like a jam session conducted by the spirits of musical heroes departed, but at others it feels absolutely contemporary, of the here and now, a demolition of the barriers that hold bands in.

Their weapons of assault are simple - guitar, bass, drums, keyboards and vocals - but it's how they use them that mesmerises their crowd who lose themselves in their music. When guitarist Mick lets go with a solo that feels like it could last for a lifetime, we're transfixed to the magic he's creating with his hands, unsure of just how he's drawing those sounds out.

They don't say much, they don't need to as everything we need to know only needs the words in Ethan's lyrics. Their debut single Hollandia is a great starting point for anyone to discover the band, but it's only the tip of the iceberg as they demonstrate with their final song Free From Everything.

Ethan And The Reformation are here to take you on a trip, destination unknown. We recommend getting on board and enjoying the ride.