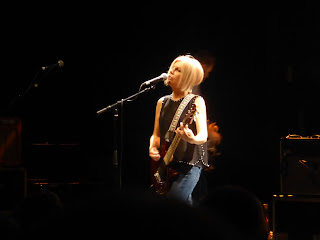 Belly completed their reunion UK tour with a celebratory show at London's Kentish Town Forum. Even tighter and more joyful than the Leeds and Manchester shows earlier in the week, the show was an absolute triumph, a band back together for the very evident love of making music and playing live.

As they come on stage, Tom tells us there will be an interval half way through their long set so that we can call the sitters. It's typical of the approach Belly have taken to this tour - a smile on their face (and ours), a collective acknowledgement that they're here to celebrate a heady period of time that yielded two albums that created so much love in this room and those they've frequented all week.

This feels like unfinished business in so many ways, the band dissolving soon after the release of their second album King, but tonight it feels like we could back in 1996. Songs like Gepetto and Red have the crowd, despite the advancement of years since their release, bouncing around although none of us can match the never-ending energy of Gail who never seems to stand still other than to tune her bass. That sense of something special still to come is accentuated by the inclusion of two new songs which on their third listen feel like old friends. Comet (working title) is already an earworm and a song that's so immediate that we're singing along by the final chorus whilst Punish packs a harder punch. 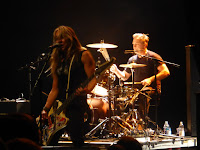 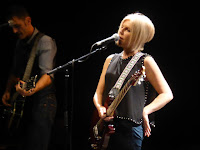 That contrast is something that defines Belly. At the start of the second set they move from the beautiful acoustic tenderness of Untogether into the raucous sweet and sour pop of early single Dusted. The set is full of both sides of their canon which makes them such a wonderful contrast - the likes of Gepetto, Now They'll Sleep, Seal My Fate and Feed The Tree are some of the finest alternative pop / rock songs you'll ever hear and the crowd respond in kind whilst there's a tear-jerking intimacy to the likes of Judas My Heart, Spaceman and Thief that the crowd give the respect their delicacy deserves. There is so much love in the room - from audience to band, from band member to band member and band to audience - and it's impossible not to be drawn into it and to feed off it.

The new material, the laughing and joking between them (and us), the changing around of the setlists every night to keep things fresh and exciting for both the band and those of us attending multiple gigs and the beaming smiles at the end on and off stage suggest that there's a lot more to come and this hopefully won't be the last time we see Belly on these shores. The sign of a reunion that works is the band creating memories more fresh, thrilling and vivid than they did first time round - this week of shows has done exactly that.

Belly's official website can be found here and they are on Twitter and Facebook.  Their debut album Star has been reissued on deluxe marbled colour double vinyl this week.