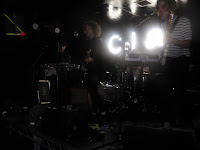 Clay are about to embark on their first big UK headline tour in support of a forthcoming EP.  The hotly-tipped Leeds four-piece brought their energetic show to Edinburgh's Electric Circus on Friday night and with just eight songs left the impression that they're a band very much on the rise.

These first headline tours for bands can often be soul-destroying for a band that's used to playing to packed houses in and around their home town. Suddenly you're out on the road in a town where no one knows you and it feels like you're starting again, but the sign of a band that's going to make it against one that isn't is how they react to it.  There's about twenty five of us in Electric Circus tonight, but Clay put on a show that could be to ten times that number and they spend almost as long after the show as they do on stage talking to their fans and signing anything and everything. The next time they're in town there will be plenty more here as word-of-mouth will soon spread especially if every live show is as strong as the one we witnessed.

Clay's set is short but sweet, but they're clever enough to know that leaving an audience wanting more is never a bad thing. Their songs mostly clock in around the three minute mark, but leave a trail of destruction in their wake. There's an infectious energy that even if you don't know them beforehand that you can't help but get caught up in. Some of their rhythms remind us of the best moments of Delphic's debut album, where rock music is flavoured with an undercurrent of a beat that makes you want to dance and their choruses are tailor-made for everyone to sing along once they know the words. 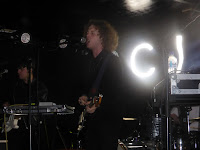 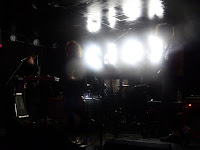 They don't say a great deal, but there's a great comedy moment where a girl on her hen do asks for a song dedication - unfortunately for her the song that's next is Nothing Happened, which front man Joe tells her is about being cheated on. The set is bookmarked by their two killer singles - starting with the recent release Stay Calm and finishing with the funk and soul tinged brilliance of Sun Dance. The rest of the set more than holds its own though - Why, a track from their forthcoming EP, is certain to raise their profile still further and last year's single Oxygen is still a winner - but there isn't a weak song amongst the eight they play.

They are obviously having a whale of a time too, living the dream, not for them is the standing there stock still looking cool, they throw their heart and soul into every single note and that transmits to the crowd. Whilst the numbers don't allow a seething mosh pit, everyone is dancing by the end.

Clay played Stay Calm, Oxygen, Why, The Beach, I Am The Cure, Nothing Happened, Honest and Sun Dance.