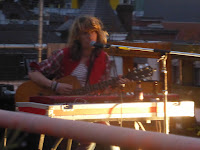 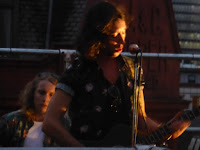 It's a brave man to take on the Manchester weather and Cupids had to reschedule two rooftop acoustic gigs last week because of the downpours and for a while it looked like tonight, the second night of the rescheduled shows, might fall victim to the weather, even as they started. But it held off and we were treated to a magnificent stripped-down set from one of the city's most promising bands.

The magic of Cupids is in their versatility; the interchange or combination, dependent on the song, between Sid and Jake on lead vocals, lead guitar, keyboards throughout the set and the contributions of Ryan who adds bass and a third voice that's worthy in its own right of fronting a band and James on drums who often gets overlooked, but who is a critical part of their sound.

The setting is perfect. With the Arndale tower and Angel Meadows as a backdrop with the Pennines stretching behind them and natural light fading as Cupids started around 9.30, it felt like it was exactly the right place and time for this performance. The stripped back nature of the set never once diminished the impact of the songs; a telltale sign of a band with the innate ability to craft songs that don't just fit one formula or situation. Cupids have been together long enough and know enough about how music should be structured to tug at the heartstrings and make people fall for you that the translation to this less full-on format doesn't in any way diminish the songs' impact and actually in many cases they feel like they hit the mark even more so than in a hot sweaty venue with the amps turned up.

Stripping the songs back merely emphasises their craft. They finish with one of the first songs they put out called Money - it changes from a two minute foot to the pedal modern Mancunian take on REM's It's The End Of The World As I Know It into something more thoughtful, but without ever losing the impact of the words. Their opening song, No One Talks, a very potent dig at the way certain things in society are brushed under the carpet as it doesn't suit the aims of the powers that be in Westminster and News International. Similarly their early single Kickin' In loses none of its potency in the stripped back environment of the Manchester rooftop with the rain clouds looming ominously overhead.

The band are in good spirits too, joking about a car horn being in sync with one song and encouraging us to shout things at unsuspecting passers by in the square downstairs, Jake yelling "I am a Golden God" to the likely bemusement of those below. They also crack that they should call a song Hope It Never Rains instead of Hope It Never Ends. They finish, because we won't let them off the roof without a final song, with a cover of Dylan's Like A Rolling Stone, which seems wholly appropriate in the city where he turned electric fifty years ago and Cupids were going the other way for two nights.

The outdoor gig concept works brilliantly - except for the obvious concern about the Manchester weather which saw last week's cancellations - and Cupids are the perfect band for it. Unfeasibly talented they take to the situation like a duck to the water and deliver a perfect set for a warm humid summer night.