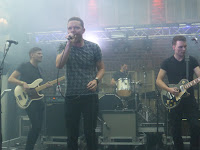 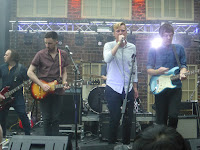 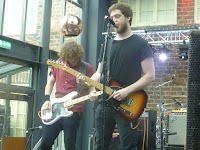 One of the great things about the growing trend in urban festivals is the fringe events. Sheffield's Tramlines is no exception; in fact one of the highlights is the three-day celebration of some of the country's finest up and coming bands in Crystal that has become something of a legend. With free entry and ten hours of bands there's no need for a wristband. We caught Sabella, Puppet Rebellion and The Slow Readers Club in the baking heat under its glass roof - three great and very different bands.

Sabella are a band that we've heard a lot about in the past from our friends in Sheffield but not one we'd experienced before today so we got there early enough to capture them. Despite some issues with the sound, the nature of the venue which isn't ideal for a gig in many ways and the insistence of having everything blasting out of the PA at top volume for every band, we were hugely impressed by their set. They hang their songs around huge melodic hooks and in front man Jake they've got a lead vocalist who delivers the likes of Leave, Moment, Hard Enough and our highlight of the set and one of their new songs Hang Me Out To Dry with a warmth that it's impossible not to be drawn to. We're impressed, although not surprised on the basis of the recommendations we'd had, by how tight they sound. They're definitely a band we'll be keeping an eye out for when they come to Manchester, particularly if Hang Me Out To Dry is indicative of their forthcoming material. 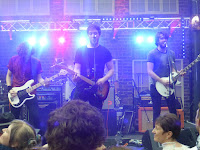 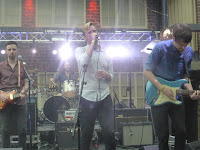 Next up are Manchester's Puppet Rebellion, a band we've championed for a few years now. Their full-on sound with two guitars and bass means that they suffer most from the sound issues as some of their angular riffs get lost in the inability of the crowd to distinguish between instruments in the first half of the set. It does get better as the set progresses and the likes of Claim To Fame and Life Is In Your Hands off their last year's EP and this year's one-off single Fragments show them to be a very polished live band and Oliver has very much grown into the band's figurehead with a passionate performance that accentuates every word. His band mates, despite the ridiculous heat and more on-stage sound issues, deliver a raucous performance and it's that energy that transmits itself to an audience that becomes more buoyant and receptive as the set progresses. They eventually triumph against the odds. 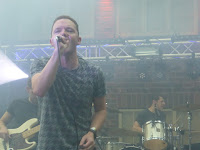 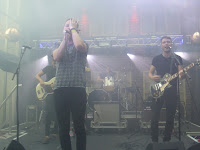 The Slow Readers Club aren't immune to the feedback and distortion issues early in their set, but it hardly matters. This is the third time in successive years they've played this stage, but this time next year there really won't be enough space in here to accommodate everyone who wants to see them. This year is a tight enough squeeze as it is, the temperatures almost becoming unbearable as the sun beat down through the roof and the lights and smoke machine didn't help matters and seemed overkill given the bright sunshine that filled the room.

Half an hour isn't enough for the full experience from these guys any more, but in their eight song set they more than demonstrate why they're on their way to selling out The Ritz back home in Manchester and they've become the name on everyone's lips after the success of Cavalcade and their appearance on the James tour. They've even got a chant these days and they leave the stage with the shout of "Readers, Readers" echoing in their ears.

They even overcome the absence of bass player Jim, his shoes being ably filled by their friend Chris (who we recall also stepped in here two years ago when he was similarly indisposed). They kick things off with Start Again and One More Minute and by that point they've delighted their hardcore down the front and won over the curious from front to back. The roar at the end of each song tells its own story and serves to feed their already sky-high confidence. There's also a delightful joy to their performance, knowing smiles from Aaron to Kurt at regular points in the set.

I Saw A Ghost, the song that changed the trajectory of their ascent, demonstrates exactly why it did that. It's immediate, personal yet has a widescreen power to it that means it can talk to anyone and everyone at the same time - hard-wiring into that peculiarly Mancunian tradition of turning despair and misery into a celebratory sharing of a problem as a means of resolution, of not feeling alone. "I'm drunk again, I guess I'll never learn" is a sentiment that we can all relate to, but as the song erupts into the "woohoo" middle section it lifts everyone out of their darkness and unites us.

What they do so well is that they have a consistency to their sound yet no two songs sound the same, which is a mean trick to pull off and one that few bands actually achieve over a period of time. The aforementioned I Saw A Ghost clearly shares its DNA with the likes of their other singles Start Again, Forever In Your Debt and Plant The Seed, but each of them has a personality of its own and the live setting makes this contrast even starker.

It's hard to look back and recall The Slow Readers Club of just two years ago and see the transformation of them from a great local circuit band to one with the right backing that could fill some seriously big venues. But that's a challenge for another day. Today is a celebration of the here and now and the success they've had so far.

The Slow Readers Club played Start Again, One More Minute, Days Like This Will Break Your Heart, I Saw A Ghost, Plant The Seed, Forever In Your Debt and Know The Day Will Come.