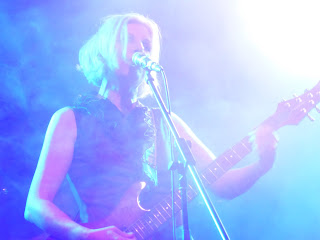 As reunions go, Belly's is probably the least heralded of the plethora of 1990's 4AD acts that reformed, despite them actually getting a better chart position with their debut album Star than any of the more feted acts ever achieved. Tonight's Leeds University shows though that they're the most special of all of them.

Belly's candle only burnt for three short years and two albums. Star reached number two in the charts to the surprise of everyone including the band whilst its follow-up King, a harder-edged record than its predecessor, didn't quite reach the same heights and the band dissolved soon after. It's taken twenty one years for the time to be right for Tanya, Gail, Chris and Tom to get back in a room and play as Belly. This tour, self-funded and self-promoted, coincides with a deluxe vinyl reissue of Star, but is really the chance for Belly to claim their rightful place at the very top table of 1990's alternative music. Like all great reunions though, this isn't just about looking back as two fabulous new songs prove that they're still able to recreate magic when they get the time together to fuel their creative urges. 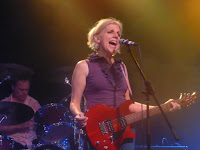 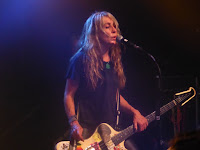 Early in the set, Tanya tells the excited audience that they'll be playing "almost everything", but such is the absolute quality of pretty much all their two albums and numerous EPs in their short back catalogue that there's at least a dozen songs that we are disappointed not to hear despite them playing for the best part of two hours. Belly's songs inhabit a world of their own - there's the sugar sweet pop tones and choruses of the likes of Gepetto, Feed The Tree and Red, but lurking underneath the surface are much darker stories that provide a thrilling contrast.

Unlike so many bands that reform and look like they're doing it for the money, Belly are the absolute opposite. I don't think I've ever seen a band have so much fun on stage, joking right from the start "now we're older, we're more in to things like tuning" is Tanya's opening line as they get themselves ready to burst into Dusted. Gail Greenwood on bass never stops moving and when she eventually does, it's only to address the crowd with the second biggest grin in the world on her face. The biggest is stood next to her - for someone who celebrated her fiftieth birthday this week, Tanya Donelly (now Fisher) looks like we're still in 1995 or that world which Belly's music inhabits where time stands still. The only tell tale sign that we're in 2016 is drummer and band joker Chris's less hirsute crown. It'd be remiss not to note here that whilst the attention of the crowd is fixated on Tanya and Gail the role that he and brother Tom play in Belly's sound. 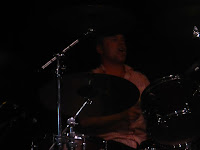 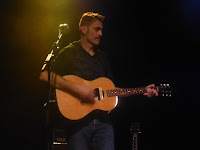 They touch every base of the back catalogue too, sharing songs from both Star and King as well a selection of their wonderful array of b-sides. Belly come from an era where the likes of Spaceman, Broken and Thief aren't songs to fill up single releases, but as vital to the band's body of the work as the likes of breakthrough single Feed The Tree (Chris jokes "let's play the hit" before they start it) and it's clear from the crowd around us that the band's fans get this too. Those fans are an interesting mix too, some of us old enough to remember the hazy days of 1993 when Star breezed into the world as a crisp fresh antidote to the grunge takeover of the airwaves and others excited to see a band they thought had gone forever for the first time in the flesh.

There's new material too, which fills us with joy for two reasons. Firstly, it means that this is likely to be something more than a one-off nostalgic look back, but secondly, because it's rather excellent and doesn't feel out of place amongst songs that have soundtracked two decades plus. They've both got working titles, Tanya tells us neither of which have anything to do with the subject of the song. Punish is the harder of the two, more in keeping with King than Star, but the chorus of Comet "I'm not trying to save you, I'm trying to get you outside" is the clearest sign that there's more chapters of the Belly story yet to be written. 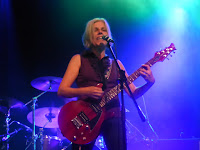 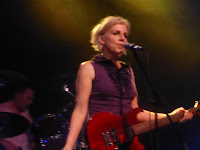 It's taken twenty one long years for the time to be right for a Belly reunion. Tonight felt utterly perfect, a celebration of the past but also of the here and now, the absolute confirmation that the best music is absolutely timeless. It's hard to tell who's smiling hardest at the end - audience or band - as they close with Star's parting shot Stay.

Belly's official website can be found here and they are on Twitter and Facebook.  Their debut album Star has been reissued on deluxe marbled colour double vinyl this week.