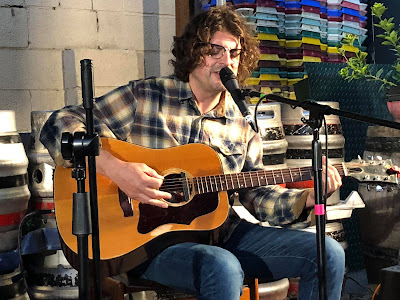 Chris Helme played the latest of Jezebel Music's outdoor shows in the intimate surroundings of Blackjack Brewery's yard down by the railway arches near Manchester Victoria with support from Hannah Ashcroft. Mixing classic Seahorses tracks with a few choice covers and some excellent new material he delighted the small appreciative crowd with both music and self-deprecating humour.

Hannah Ashcroft opened the evening with a seven-song set that was well-received by an appreciative audience. The stripped-down nature of her solo acoustic set brought much of the fragility in many of her songs to the fore, her vocals lacing them with the emotion that accentuates the words she's singing and the sparse yet precise guitar work whilst exposing the tenderness and personal nature of them. 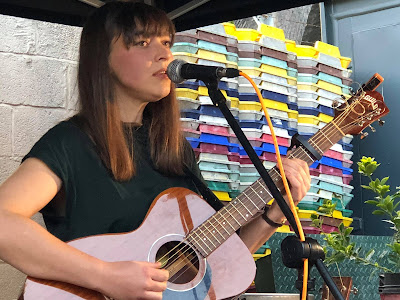 Neptune and Landfire, which open the set, have a rich feel to them that's deep-seated in classic songwriting tradition whilst tracks like Eden, which is likely to be released in the near future she tells us, and Under The Static showcase the possibilities of full band performance of the songs without diluting the fact that they stand strong in their own right. That she can hold the attention as a support act of an audience starved of human interaction and awaiting the main act at a live music event is testament to the quality of the songs and the performance.

One of the downsides of being the ex-frontman of a charting indie band is the massive weight of expectation on a set full of songs that defined that period of their career. Chris cleverly neither overplays or underplays them, recognising their importance to people but not simply resting on them as the centrepiece of the evening. And whilst the likes of Love Is The Law, Blinded By The Sun, You Can Talk To Me, Hello and Boy In The Picture might prompt (gentle) singalongs from the audience, the rest of the set demonstrates that there's far more to Chris Helme than being the guy John Squire hand-picked to front his post Stone Roses band some time in the long dim and distant past.

A number of new tracks are revealed, each one different in its own right and representing an artist still with creative juices flowing and with something to say. All In The Mind is a particular highlight, written before lockdown happened, but which very much feels like it predicted the chaos and instability it would inflict on us. Sailing Home, which may form part of an album he reveals he is working on with Nigel from Dodgy and Mark from The Bluetones, might be a simple song but it's so beautifully crafted and sung with real depth of meaning that it's perfect as it is whilst a third one, which is so new that Chris hasn't even decided whether he likes it or not, has more of an edge and anger to it. 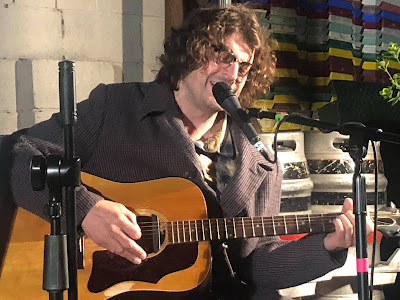 His solo back catalogue is represented by, amongst others, an impressive Lorali from 2010's Ashes and Summer Girl from 2012's The Rookery - and when he talks of having been in a band, Chutzpah, for seven years before finding two years of stardom with The Seahorses and remembering more about the former and being amazed by the response when he offered to hand-write lyrics, it really strikes home just how unassuming and grounded he is and that the appreciation that rings around the yard as the cold sets in is very much mutual.

He intersperses cover judiciously within the set, ending the first section of the gig with The Faces Ooh La La after The Grateful Dead's Friend Of The Devil, yet he saves the best of those for last - his own take on Nina Simone's Be My Husband with "the worst song of all time" Survivor's Eye Of The Tiger thrown in the middle showing both his love of genuine classic songs as well as not taking himself and what he's doing too stone-faced seriously.

And in that is so much of the charm of the evening and why he provokes such a warm reaction from the audience. You sense the joy he gets from performing, from the intimacy of interaction with others and the sense of immense pride he has in everything he's created not just what he's best known for.