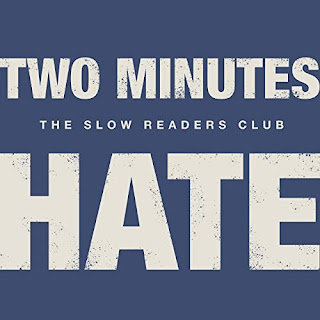 Two Minutes Hate is the second track to be taken from The Slow Readers Club's forthcoming album 91 Days In Isolation. Taking aim at the way hatred is spread on social media and then translates into real life, the song is a very prescient observation about the way people thrive off creating chaos and division.

Musically and lyrically Two Minutes Hate with its chorus line - "I start to crave chaos, unleash this rage in us, grand demonstration, two minutes hate and I start to crave chaos, unleash this rage in us, wheels set in motion, a constant" - is further proof of the more direct approach that The Slow Readers Club have taken with the 91 Days In Isolation album. Written remotely with the four members of the band sharing ideas via a file sharing site, the songs were crafted in isolation before being taken to Edwin Street Studios in Bury, where they recorded Cavalcade and Build A Tower, once lockdown was lifted. The album very much has the feel of one that was made without the pressure of trying to write a hit album or big singles, but ironically that environment appears to have produced some of their best work to date.

The album will be released on October 23 and is completed by six further tracks - Barricades, Everything I Own, Lost Summer, The Greatest Escape, Wanted Much More and Like I Wanted To.

The album 91 Days In Isolation can be preordered here.