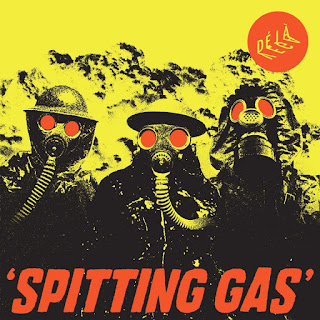 Déjà Vega have announced the digital and physical release of their new single Spitting Gas and their biggest UK tour to date. Clocking in at just two minutes and fifteen seconds, the song captures the exhilarating live performances of the track in the times before lockdown - and is likely to feature on their second album that they were recording at the start of the year.

Starting with an onslaught of drums and a primeval roar from Jack who then pours out the lyric like a stream of conscience in between delivering huge waves of guitars and pedal effects, Spitting Gas is short, sharp and bitter-sweet. It doesn't outstay its welcome given its brevity, but it'll leave you punch-drunk and bruised on first listen such is the ferocity with which the song packs everything into such a short timescale.

A limited single-sided 7" single can be ordered here.