TRACK OF THE DAY 2 : Ist Ist - Drowning In The Shallow End 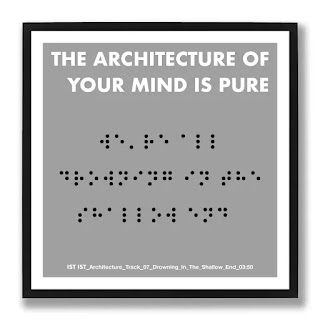 Recommencing their series of videos and limited edition prints to accompany each of the ten tracks from their independent top five album Architecture, Ist Ist reprise with track seven from the record Drowning In The Shallow End and a video shot in the first days of lockdown relaxation.

One of the most restrained moments on Architecture, we described Drowning In The Shallow End as "the song feels like it's living on a knife-edge, like a taut string that's about to snap, a deck of cards that's about to come crashing down. Atmospheric vocals envelop each other and the listener and form a tight suffocating grip that won't let go as Adam considers that the only way to succeed in society is to conform - 'deep in the worst kind of politics and misconstrued ideas, a lie with the mouth and a wink of the eye' but how that ultimately leaves you floundering around without substance or integrity."

Digital versions of their previous limited edition releases and their most recent bootleg recording (a desk / two field recorder hybrid of January's intimate Salford Sacred Trinity show - 300 CDs of which sold out in six hours) are available to download from their Bandcamp.