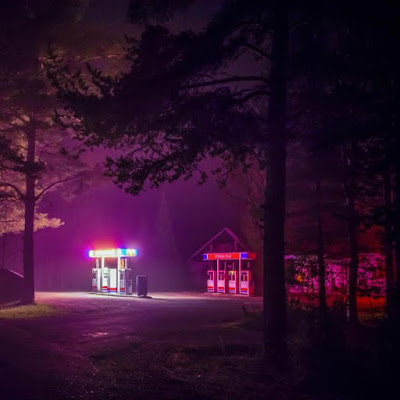 Carousels starts with a brooding slow build instrumental with cut up vocal samples deep in the mix before the much-discussed Tony Allen drum sample provides the structure on which to layer and around which to wrap their intricate luxuriant melodies. Half way through the opening track it feels like Doves have never been away and they matter more now more than ever. Jimi's vocals may not possess the technical proficiency of other more celebrated frontmen, but there's only a minute few who can express emotions with such depth and empathy (for us the real sign of a great vocalist) - on I Will Not Hide when he sings "I will not yield, I will not hide" and the last syllable lasts a lifetime, you know he's got your back. Musically its magic is in the tight taut interplay of drums and synths, female backing vocals and processed sounds to create an uplifting yet understated wave on which you can allow yourself to be lifted up on.

Broken Eyes opens itself out to the listener from the start, widescreen wistful and with a battered sense of romanticism as Jimi declares "I've been thinking about our past" as the song builds and carries you along under its momentum without ever losing control or direction. For Tomorrow starts with the same reflective vibe in the verses, looking back at darker times, but the chorus is a thing of a beauty urging reconcilation - "just try to talk to me, are we really from different worlds, for tomorrow, we will breathe again, we will love again" - and making you feel everything will be alright at the end. It stops dead and turns into another song - an atmospheric sparseness giving way to warm guitars and more inward-looking soul-searching before a big build back to the final section that eschews the obvious move of the chorus coming back for something more free-form, a sign of the more relaxed approach to this album and the plethora of ideas they have.

That follows into Cathedrals Of The Mind, a magical mixing pot of samples and sounds that come from all directions, but which are bound together to create something more than the sum of the parts and with an intricate attention to detail of how it comes together to create a kaleidoscopic whirlpool of sound that draws you into the centre as everything swirls around you.

Prisoners is more urgent in its approach, taking off on musical tangents and then returning to the subject matter of being lost in your own head and the turmoil mental health has on that space - "hello old friend, it's me again, it's been a while, we're just prisoners." It's here where the tone in Jimi's voice perfectly accentuates the essence of the words that speaking or reading them could never hope to express. Cycle Of Hurt starts to provide acceptance of that situation and recognition that the person who can facilitate exiting the downward spiral and it's not an easy path - "have I got the nerve, I've got to keep myself alert."

Mother Silverlake sees Doves move away from the sound that made their name into more adventurous territory - shared vocals between Jez and Jimi, echoes of African music that they've hinted at before, synths underpinning and also providing the change of direction. The magic of the song is how so many different ideas are brought together, and there's enough in this one track for a whole album, and yet are made to sound coherent and focused.

The title track starts as a one note piano ballad questioning our priorities and our value chains - "how long till we see what we really want, till we see what we really need?" - building and building as we get towards half way, layering dance beats under it that become more evident as it heads to its climax where everything drops out other than a repetitive beat that harks back to the Afrobeat ending of There Goes The Fear in their live shows.

Forest House finishes off The Universal Want with evocative imagery about walking through pines and escaping the hustle and bustle of the city for somewhere more peaceful - perhaps a metaphor for the creation of this album, out in the countryside around Manchester away from prying eyes and the focus and pressure that brings. It's a simple, unfussy end to the album.

The Universal Want is the sound of a band making music on their own terms with the stars aligned in a way of their choosing. Casual observers may bemoan the lack of anything as immediate as Pounding, Kingdom Of Rust or There Goes The Fear, but this is an album to immerse yourself in and let envelop you and reveal more beauty with each and every listen. You can hear the birth marks, the sound of a band breathing easily, enjoying life and each other's company again.

The Universal Want is out on Friday on download, CD, vinyl, white vinyl and deluxe boxset.