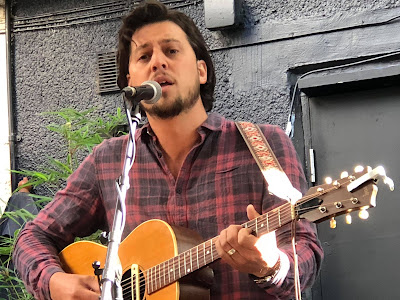 The latest in the series of outdoor shows at The Rose And Monkey in Manchester saw an intimate Sunday lunchtime show by Dave Fidler accompanied by Adrian Gautrey playing a mix of new songs as well as tracks from his two albums I'm Not Here and Songs From Aurora to an appreciative crowd.

Manchester has a history of great songwriters, many of them that go under the radar of those from outside the city's boundaries and some who are lauded to the heavens. Dave Fidler very definitely belongs to the first group, a songwriter who is able to take personal experiences and observations and make them feel relevant to anyone and everyone. It's an ability that provokes a strong reaction from those fortunate enough to cross his path and he delivers the songs with a warmth and humility that makes it impossible not to be drawn in and live the songs, relate them to your own situation and to let them knock down your emotional barriers and aim for your heart.

Today's set is no exception. With a modesty that sells himself too short, a sense of humour that makes some of the subjects a little less dark but which retains the gravitas to distinguish between the sad moments and those where he puts an arm round your shoulder (literally, not actually of course) and makes you feel like it'll be alright. There's songs about his father, his mother, both his kids and one of his sisters, but they could equally be about someone in the audience's such is the way the likes of Eternal Road, Ailsa, Home To Me, A Song For Nico and Easy Gone Easy Come have a warmth and intimacy that touches people's hearts in the way music of this kind should. 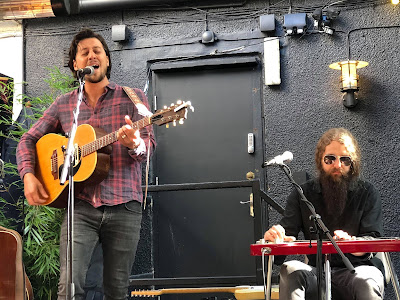 The new material is impressive. He starts with All The While and Will I Ever Learn, given an Americana twist by Adrian's pedal steel, which is even more impressive considering his unfamiliarity with the songs, which demonstrate his development as a songwriter without losing what made the first two records so simple yet special. Higher has an almost gospel feel to it, lyrically about the power of friendship in getting you through rough time with an uplifting powerful chorus that demands coming together to be stronger. Old favourite, yet still unreleased, Love Listens is dedicated to a couple in the audience and hopefully will make the third album as it's probably his finest moment - the chorus "money talks but love listens" is one of the most appropriate summations of the world's ills to be expressed in one sentence.

Towards the end of the set he looks back to the two albums he's released and more familiar material to the audience. The Water and Another Word For Home are stripped down yet lose little of the poignancy of the originals, such is the strength of Dave's craft which places him on the same level as his peers who are praised to the rafters for such songwriting. We're won over by this point and happy to listen to whatever he chooses to play for us. Silver Spoon, Skylark and Taking Over up the tempo a little, whilst A Song For Nico provides the opportunity for us to sigh at the touching dedication to his daughter who realises she's suddenly centre of attention.

Dave Fidler might not be a household name, but in those homes that own his records or have witnessed his live shows, he's very much a loved one. Songs from the heart that reach out to ours are delivered with an emotional clarity and honesty and a voice that has the clarity for us to know that the stories are real and lived.