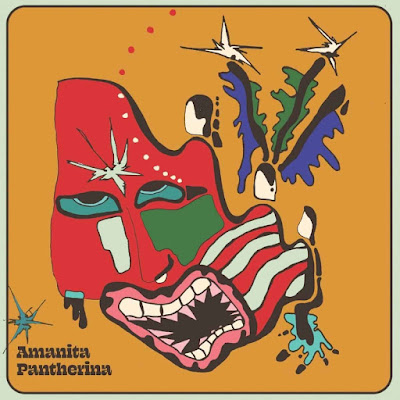 Cabbage are at a crossroads as they release their second album Amanita Pantherina - third if you count the Young Dumb And Full Of Cabbage compilation that really was their debut. Are they still relevant? Can they still conjure up the headrush adrenaline that their first four EPs announced them with? Has too much of the mud of the ultimately false accusations made against them stuck? Freed from the constraints of a record deal and returning home to their Brassica Studios in Mossley to regroup and record Amanita Pantherina, it very much feels like a release from the events of the past few years.

What they've done is to make the record with an insular approach, to make the record that suits them rather than to try and please the money men - and that makes Amanita Pantherina feel a far more relaxed record than its predecessor Nihilist Glamour Shots, one that spreads its wings and shows new aspects to Cabbage's art and it's all the better for it. It might not have the new band exuberance of those early EPs but it's the same heart and soul that drives Cabbage through the eleven tracks that make up this record.

Leon The Pig Farmer, named after one of Manchester's best street poet, is a short sharp opener. It touches on the subjects of his poems - the futility of fighting wars to protect the interests of a few and the impact it has on those on the ground captured in the line "nationalism be the curse....all those fighting for what? A bodybag, a tabloid, depression, what?

Single You've Made An Art Form (From Falling To Pieces) shows the development in the subject matter of Cabbage's songs - it's a song about how "there are no winners in affairs of the heart"- to the personal rather than the social and political commentary of their earlier works. Armed with a gradual build into the chorus, earworm harmonies and a simple yet direct chorus of the title, it's probably their most accessible track to date.

If Cabbage hadn't made such a point of Get Outta My Brain being a tribute to Factory, Tony Wilson and the Happy Mondays, every review would be calling it out. The lineage has always been there, their early singles mirroring the chaos of the Mondays in their formative years if not the subject matters.  Raus! moves onto the subject of Brexit, taking aim at the shift in the culture of our country since the leave vote in 2016. They have a soapbox and they're intent on using it to decry how we've been split down the middle, possibly irreparably, by the aftermath. The use of the German word for leave adds further impact.

Once Upon A Time In The North returns to old subject matter - the North / South divide covered in It's Grim Up North Korea - and the hand to mouth existence when you're on the wrong side of the "I'll be the worker, you be the industry" divide. Frantic, potent and targeted, it's at moments like this where Cababge's social commentary really hits home when you look at the current Coronavirus and the way deprivation impacts on society's poorest.  Hatred surprises with its stripped back acoustic approach compared to what's gone before - but stays on message dealing with the way in which the breakdown of traditional industries and professions leads to poverty and looking for someone to blame.

Medicine quickly turns the pace back up, quick-fire lyrics about spin doctors and the lies of those at the top of society - asking the direct question "how many times do you wanna make the world spin?" Named after a David Lynch painting, I Was A Teenage Insect is the song where Cabbage show how far they've progressed. Rather than fill every second with words, as they've often done, the chorus doesn't have any lyrics just harmonies and doesn't need any. The verses talk of "they make you dance so sweet, they make you march on the beat", potentially a reference to the period where they were signed and had to curb their natural instincts to try and create a saleable product acceptable to the man. The defiance of "I ain't here to boost your economy, no room for your regime" feels like a retrospective two fingers in the rear view mirror.

There's more harmonies in Direct / Dictate, possibly the most beautiful piece of music they've laid down in the parts where the huge guitar riffs don't take over and obliterate anything around it. It's the type of juxtaposition that Cabbage have always had, but here it feels like they've retained the edge that felt smoothed on their previous album. Piles Of Smiles is probably the closest they get to their earliest material, the lyrics making less sense than what's gone before - "you play four beats of blues in front of a crowd and your head grows to the size of Spain" as an example - and it feels slightly out of place here.
The album finishes with Terminates Here, a six-minute reflective track that they do so well but which they get little credit for. It's drenched in a bruised battered romanticism of life in northern towns, a sense that you shrug your shoulders and get on with it whatever life throws at you. It's also has a defiant message - "of all sad words by tongue or pen, the saddest of these 'it might have been', the trajectory was rocketing good, we fell from grace on to the guillotine" might well be describing the band's fall back from when they were media darlings and pursued by labels. Amanita Pantherina won't lift them back up there, but it's a record that will delight their hardcore fans and more importantly one where Cabbage remain true to themselves.
Cabbage's website can be found here and they are on Facebook and Twitter.
They tour at Nottingham Rescue Rooms (May 5), Glasgow King Tut's Wah Wah Hut (6), Newcastle Riverside (7), Birmingham Castle And Falcon (8), London Lafayette (13), Manchester Gorilla (14), Liverpool Jimmy's (15), Leeds Brudenell Social Club (20), Stoke Sugarmill (21), Preston Ferret (22), Bristol Fleece (27), Brighton Patterns (28) and Cardiff Clwb Ifor Bach (29).
___________________________
Follow Even The Stars on Twitter at @eventhestarsuk and like our Facebook page for all the latest updates
Posted by Even The Stars at 22:02