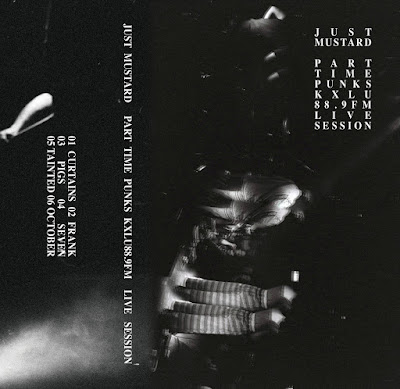 Hailing from Dundalk in County Louth Just Mustard are another band from across the water shining bright during these dark troubled times. Their debut album Wednesday, rightly so, featured in many Album of the Year lists for 2018 and it felt like the band would go from strength to strength before a global pandemic brought the quintet’s juggernaut to an unexpected halt. This limited edition release seeks to bridge the gap yet is exceptional in its own right.

Support slots with the likes of Fontaines D.C., The Twilight Sad and The Cure (big fans of the band) have ensured their musical prowess hasn’t gone unnoticed and in August of this year they released, old school style, on limited edition red cassette only, a six track live session recorded for the Part Time Punks radio show on KXLU 88.9FM.

Like something out of a horror film the song takes a sinister turn as guitarist/singer David Noonan screams above the chaotic noise. The devil and the angel doing battle vying for the attention of the listener. The dreamy vocal of Ball counteracted with the devil like hellish nightmare of Noonan’s.

Never more so relevant than right now Katie Ball bellows “I watch TV to fall asleep and I can fly in my dreams” as Frank takes us on a winding path that twists, turns, goes down dead ends, turns back on itself and finds the band back on the right path again.

The guitars of Noonan and Mete Kalyon are layered on top of each other going head to head to be heard the loudest while the meandering bass of Rob Clarke, and Maguire’s drums, keep it all together acting as both peacemaker and pacemaker for the five piece.

There’s no respite from the haunting, sombre sound as Pigs draws you in to a place you know you shouldn’t go. The intro sounding so far away like it’s underneath the floorboards or in the cellar and the repeated bludgeoning noise making you curious to go and check it out.

Ball’s eerie voice enticing you further into the darkness before light relief as the song takes a surprising turn with a dance vibe uplifting the tempo to another echelon. Just when you think you’re safe the guitars come back to the fore like saws cutting you open and cutting you up with the sound of drums bludgeoning you further into submission.

Seven shimmers and glistens brightly at the start and it’s hard to ignore not just the ethereal bliss of the music but the beauty of Ball’s voice too. The “do my head in” mantra gets more and more intense as the reverb suddenly rises above your head and takes over as you find yourself transfixed and hypnotised by all five members who take us on a musical journey of discovery amidst a kaleidoscopic sonic assault that offers more to the ear on each and every listen.

Tainted is a more mellow ethereal offering at first although it still contains the dark brooding intensity of a band whose songs are cathartic to the listener. It concludes with swirling guitars, an undulating bass and crashing drums against the backdrop of an ardent vociferous vocal that demands, as well as deserves, to be heard.

The superb six track session is wrapped up with October. Referring like many of the songs to dreams, and nightmares for some, this is the perfect ending to an offering that will only whet the appetite for further Just Mustard releases. While caustic and incisive the song delivers perfectly leaving us walking a tightrope, perilously negotiating a treacherous path. The uncertainty and uncomfortableness of it all captured not just in the vocal but the music too. Katie Ball’s vocal interchanging between agitated and soothing in an attempt to appease the menacing guitars of Noonan and Kalyon that threaten to take control of the song. Throughout the whole session the exhaustive drums and rolling bass of Maguire and Clarke respectively ensure there’s clarity within the chaos. The abrupt ending signifying where many bands are right now. The oxygen that keeps them breathing and surviving taken away from them without explanation to devastating effect.

Just Mustard have gone out about their business with surety during these troubled times and this refreshing, exciting and sonically challenging session is testament that they have so much more to offer. The sweeping landscapes they create send your imagination into overdrive and we can only hope that there is more to come from this band - a beacon of light, psychedelic at times, during the darkest of times.

The limited cassette has now sold out, but the digital album can still be purchased from their Bandcamp.