TRACK OF THE DAY : The Slow Readers Club - Yet Again 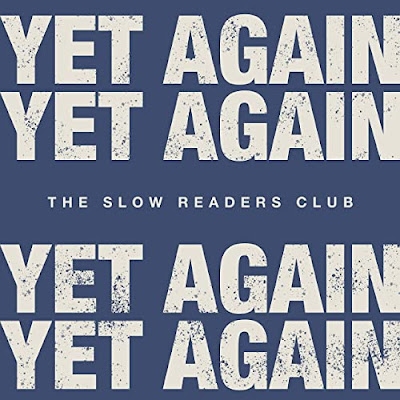 Yet Again is the first track to be taken from The Slow Readers Club's forthcoming album 91 Days In Isolation, an eight-track record written in isolation and recorded at their old haunt Edgar Street Studios in Bury once restrictions were eased. A powerful punchy song with a harder edge than their Top 10 album The Joy Of The Return, it finishes with a positive message amidst the doom and desperation of these extraordinary times we're living in.

The song makes clever use of repetition throughout to hammer home its message, exploring sonic territory that's both new for the band but which still retains their instantly recognisable and addictive sound that's won them over so many fans in the past few years. It starts in a dark place with talk of self-destruction, refusal to listen and getting stuck in the past, but turns into optimism of emancipation, chasing shadows from the mind.

Yet Again was previewed at their recent live stream from Bury Met alongside Barricades, another track from the 91 Days In Isolation. The album will be released on October 23 and is completed by six further tracks - Everything I Own, Lost Summer, The Greatest Escape, Wanted Much More, Two Minutes Hate and Like I Wanted To - that showcase a band having to change their working methods to make a record that's crisper and more direct than its predecessors.

The album 91 Days In Isolation can be preordered here.