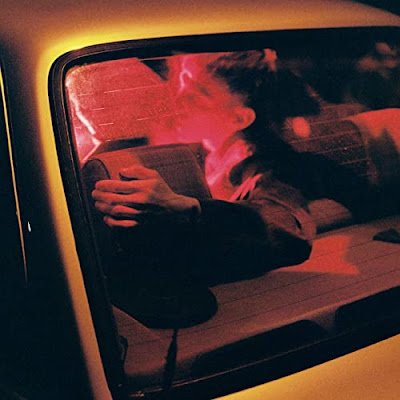 Pillow Queens' debut has been four years in the making, anticipation built up through a series of EPs and then singles, the last five of which feature on In Waiting. It's an album of this time we live in, an introspective look at life in a modern city like Dublin from underneath the glossy veneer with stories of the shadow of religion, still visible homophobia and the difficulties of growing up and becoming an adult when the cards are stacked against you mentally and financially. It's direct, bold and uncompromising in both its sonic and verbal attitude yet refuses to allow itself to be compartmentalised into a genre - as impressive a debut in many ways as some of the lauded ones from the same streets.

Recent single Holy Show opens up proceedings and sets the tone immediately. Within the first verse they've declared "I've got your eyes and cheeks in front of me, filling the space between my thighs" and it's Pillow Queens making sure you're ready for their honest confessional take on life.

They're not one for chest-thumping statements - they focus on the personal, the word I is present and up front in each of these ten songs which draw you in with glorious harmonies like the chorus of Child Of Prague that accompany the simple message "I'm not going, if you're not with me" and which for emphasis repeats the "I'm not going" whilst the refrain "leaving me out on my own, leaving me out in the snow" rings with hopeless wide-eyed romanticism.again use harmonies to lift the song in the breakdown.

Handsome Wife is tighter, more claustrophobic, a harder edge than what's gone before a soaring riff swoops in at points before they once again make glorious use of harmonies in the breakdown. HowDoILook takes a long hard look at issues of body image - asking questions like "how does my body look in this light?" - and the constant fight with the mind. It offers encouragement too - "but you won't admit your flaws, and oh God they're beautiful" - a much more powerful and potent message of self-emancipation and freeing yourself from demons because it focuses on the intensely personal. Its final repetition of "it took a while" takes it further, emphasising the road isn't an easy one and you have to keep going.

Liffey might lack the immediacy of hooks of what's gone before it, but it replaces it with a tension and the image of "someday you will have my head, you will have my head on a silver plate" creating a sense of trepidation but also a defiance in face of those that seek to take you down.

A Dog's Life takes aim at the financial and emotional turmoil of young people, their hopes and dreams of self-sufficiency and independent countered by the need to be "burning both wicks" just to survive with the charm of a chancer and good looks.

Their breakthrough single Gay Girls takes aim at centuries of oppression of LGBT culture by the deeply religious Irish state and church structure. It possesses the most heavily accented chorus of the whole album which gives it deeper perspective - this is personal, the fight back against still prevalent attitudes to natural feelings and emotions. The almost choral vocals with which they intonate "Marie, Marie, Maria" is so gloriously subtle yet unmistakable pointed.

Harvey revels in its tenderness, rare moments of unashamed beauty around a set of rough around the edge diamonds. It shows a very different side to Pillow Queens' sound but one in which they also excel. There's a mysteriousness to who the Harvey of the song is, but that just adds to the effect.

Brothers is right out of their Dublin contemporaries The Murder Capital's unwavering message to love those close to you before its too late. The "not another reposing in dirt" references the growing increase in suicide in the young of their city - and offers the solution in "I love my brothers and my brothers love me" as the best, and maybe only, antidote to the darkness that leads someone down the path. It paints a desperate picture in the chorus but in that one line offers hope.

Donaghmede concludes the album with a message of home being a sanctuary, a place to escape from the chaos of the city into "the warm embrace of the northern bay" area that gives it its name. It's the sonically most ambitious track on the record, stretching out to over five and a half minutes.

In Waiting is a mightily impressive debut album in many ways. It talks of society's ills through personal experiences and offers hope and counters to hatred, bigotry and the mental and physical pressures that are placed on young people growing up in fractured times. Its overarching message is that you have to learn to love yourself and those around you, imperfections and all, and to be the best version of yourself for you and those around you and to face whatever seeks to pull you under head on. In many ways that's the most important message anyone has put down on record right now.