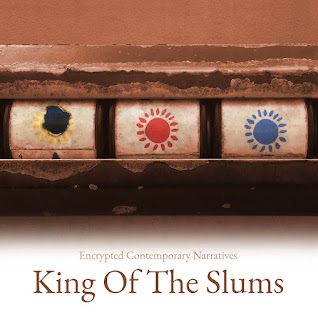 Hulme's King of the Slums, legends of the Manchester scene for more than three decades, return with their seventh album, the follow up to 2018's Artdog Gods. Stuart Ralston has a listen.

King of the Slums formed back in mid 80s Manchester, playing at The Hacienda with The Stone Roses in early '89 and recording three albums before splitting in 1991, a time when Manchester was the centre of the musical world. Like contemporaries Stockholm Monsters, King of the Slums split at a time when they still had much to offer, perhaps never quite reaching the audiences they should have. Fast forward to 2009 and a brief reunion took place, before a more permanent and harmonious partnership in 2016, which has since resulted in a further two albums. Encrypted Contemporary Narratives might be album number seven but it is delivered with the passion and commitment of a debut.

Posh Town Witchcult opens with a great bassline and complimented by more strings as Keigher delivers a biography of Julia. Lyrically and musically, there's more than a hint of The Fall here, which is no bad thing especially as the musical landscape of 2020 is sometimes ludicrously filled with pretentious over hyped pseudo punk rockers from Bristol. King of the Slums are the real deal; on tracks like Fridgehead Canoe you can hear that.

Cockroach Frequency and Dissident Citizen are much more dance orientated than their predecessors and ably demonstrate the versatility of the band. Snake Pass Luggage is perhaps the highlight for me with an almost tribal drum like introduction – it sounds like it will be a real live highlight once the band get the chance to grace a stage.

Codewriter changes the tempo slightly with Keigher's vocals again the highlight. Singing in a distinct Manc tone adds more passion, authenticity and grit to the recordings. 104 Words changes the mood again and is shorn of guitars, instead being delivered primarily on piano.

In Encrypted Contemporary Narratives, King of the Slums have given the listener everything they said they would. There's a lot in there from lyricist Keigher, albeit that it's encrypted! Musically, the band have produced a timeless record that sits well with their contemporaries and predecessors.

The album is available via their Bandcamp.